Got totally caught up in this; baseball hero, stalker plot, Florida setting 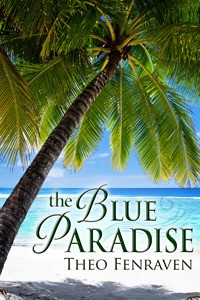 Opening Line: “Devin Carter had five days off thanks to a torn knee ligament, and he needed to get away from everyone and everything he knew, so he threw some clothes and a couple books in a bag, loaded the dog in the car, and drove down the gulf coast of Florida to Naples, where he picked up the Tamiami Trail.”

Wow, I totally got into this one, a real surprise as the story didn’t at all go where I was expecting it to and the love scenes were for the most part fade-to-black (which might explain some of the lower ratings?) Sure we get the usual hand jobs, blow jobs and make out sessions but except for a delicious “edging” scene (yup, learn something new every day in my M/M romances) our hero “makes love” and leaves the rest to our imaginations. Kinda refreshing.

Blue Paradise also gives us a creepy stalker plotline –which I didn’t see coming, and our hero is a professional baseball player. Yum! And wasn’t it fun going behind the scenes with him; locker rooms, agents, groupies etc. Giving me flashes of For Love Of The Game (without Kevin Costner) as he tries to break Barry Bonds homerun record on a failing knee. I should also mention the awesome Florida setting here; so well written that I could actually feel the humidly, smell the salt air and see the swaying palms. Total escapism and I loved it. This was a big hit for me and I’ll definitely be seeking out more from Theo Fenraven.

Professional baseball player Devin Carter is nursing a bad knee, benched by the team doctor he’s hoping a week’s rest in the Florida Keys will be just what his mind and body need to help him break the home run record when he returns for the remainder of the season. With no true direction in mind Devin just grabs his dog and hits the road, eventually checking into a non-descript hotel bungalow on the beach. It’s there at the Blue Paradise that Devin meets Jim, the grandson of the owner and the man he doesn’t know he’s been looking for.

Their affair is short lived but meaningful and when Devin returns to Sarasota they decide to keep it going over the phone. There isn’t any angst or unnecessary drama between Devin and Jim; it’s all very mature (that aspect has been saved up for Jorge.) Devin is still in the closet when it comes to the media and his teammates but otherwise quite secure in his sexuality so even though he’s never fooled around with a teammate before when the opportunity presents itself - and with Jim’s open minded blessing, he forges into unknown and potentially messy territory with the team’s new outfielder. And that’s when things get really interesting.

For a novella I managed to I got way caught up in the stalker aspect of this story and the utter helplessness Devin feels as his life crumbles around him. He can’t even go to his coach or the police without coming out, however as the violence escalates he also runs out of options. The bad guy here is nothing new or special but he still managed to make me hate him while upping the suspense level. My only real complaint here would be Dev and Jim’s initial meeting which just felt a little too easy and convenient but hey what do I know about gay hook ups?

Lastly I have to give a shout out to Rusty the dog who manages to get quite a bit of realistic page time. So much so that when the stalker starts threatening him I actually said to myself (and the author) you better not hurt the dog or I’m gunna stop reading and when I start talking to my books I know it’s good. Cheers