Loved parts, struggled with others but a good Romantic susp and great tortured hero 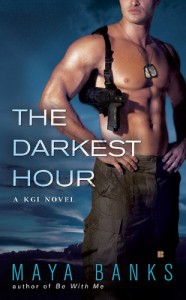 Opening Line: " He'd hoped if he drank enough the night before he'd sleep right through today."

Ex-Navy SEAL Ethan Kelly is hangover again, it's been a year since his wife Rachael was killed in a plane crash in South America and he can't seem to move on, the pain as fresh as the day she died. Ethan has cut himself off from his large family and refuses to have anything to do with his brother's top secret business, that of KGI (Kelly Group International) With their expensive military backgrounds the Kelly brother's are essentially guns for hire taking the tricky jobs the government can't and specializing in intelligence recovery and hostage/kidnap victim extractions.

On the anniversary of Rachael's death Ethan receives an unmarked package containing surveillance pictures and maps of a drug cartel base camp in Columbia. The photos show something else too, a woman who looks very much like his late wife. Ethan doesn't think anyone will believe him but of course he now has to try and find her. Good thing most of his family is in the victim recovery business and handy with a gun because he's heading into the jungle and getting his wife back.

But Rachael's not the woman he knew a year ago; forcibly addicted to drugs, and suffering from memory loss and PTSD she may never fully recover and just because he's got her back Stateside doesn't mean she's safe either, the bad guys still want her dead. And then there's that little matter of the divorce papers.

There were parts of this book that I loved and others that I struggled with but all in all this was a really good romantic suspense. Banks writes an awesome tortured hero and although I did get tired of Ethan constantly "dropping to his knees" in front of Rachael and thanking or apologizing to everyone now that he's stopped self medicating, I loved that he was man enough to shed a few tears (that bathtub scene killed me)

One of my biggest issues here however was Rachael's extreme closeness to the brothers; it was just a little too intimate. They were forever enfolding her in their arms and cooing "Baby" and "Sweet Pea" and I guess because I've read some of Banks erotica I kept waiting for her to get it on with at least 3 of the 6 Kelly boys which distracted me from Ethan and Rachael's rekindled love story as well as creating several weird, ick moments. There was also the issue of Rachael having been adopted and brought up by the Kelly parents in the same house as her husband to be. Why was that little bit of info necessary? Wouldn't that kind of make everyone related? Another ick moment.

I also found that there were just too many Kelly brothers to keep track of properly and before long stopped even trying. Except for Garrett and Sam (who I'm sure were just trying to get lucky) they all sort of blended together along with the Kelly parents and a side story involving a runaway girl named Rusty that I can only assume we'll see more from in later books. I'll be continuing on with the series of course :)