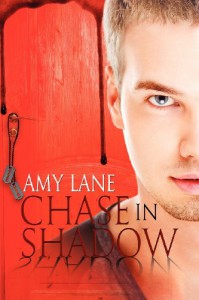 Opening line: “Did you have fun?" Mercy asked as Chase negotiated the slick Sacramento streets in the dark."

My first from author Amy Lane but not my last for sure, however it may take a while before I’m up to facing this sort of angst again. Yeah Chase In Shadow is heartbreaking and beautiful and damaged and gorgeous and just such a freaking hot mess, I won’t be forgetting him for a long time to come.

As much as I came to love this story I should tell you though that I had a hell of a time getting into it, and quite honestly almost gave up more than once. My initial problem was sorting out the huge cast of characters, most of whom had two names (which wasn’t explained right away) Chase is also Chance, his love interest is Tommy or Tango then we have childhood friends, porn industry friends, directors, fiancées, it took me ages to figure who was who. Compile that with a very unique style of writing that jumps from past to present with real events, dreamed events, desired events and directors cut type filmed events. The dialogue also takes some getting used to because in almost every circumstance Chase includes a “wished” internal response to what he actually says.

“Is there something wrong?” Donnie asked, like he was afraid of the answer.

At some point though everything just clicked for me and fell in love with both the story and the uniqueness of the writing. Add to that one of the most emotionally damaged, frustrating, contradictory characters I’ve ever had the pleasure of reading, a heartbreaking romance including love scenes that defy a hotness category and well, Amy Lane‘s got herself a new fan-girl.

Chase “Chance” Summers has it all….from the outside He’s young, popular, good looking and athletic with a beautiful fiancée and supportive friends. Which is just how he planned it. In between studying for his engineering degree, playing baseball and saving for a house Chase has also managed to hide an abusive, messed up childhood behind the red door (in his mind) -which, throughout the course of the book slowly gets opened. His farce of a life seems to going along just fine until he adds one more lie to his already toppling house of cards. Telling himself that it’s for the money and that he’s straight, I mean he’s got a fiancée right? Chase decides to try out the gay porn industry.

Entering “Johnnies” is a revelation because for the first time in his life Chase “Chance” feels free. In fact when he’s with another man he’s flying, but the house of cards is starting to sway. Keeping his alternate life from his girlfriend is almost too easy, which of course just makes him feel like a dick but then again he can hardly contain himself once he starts thinking about who and what he’s going to be doing during the next shoot.

As you’ve assumed this story goes to some very dark places, I mean on page one he’s attempting suicide so you know you’re in for a roller coaster ride. But I never really expected the level of grief, torment and self abuse that we get to see here. Towards the end there’s a huge surprise (that I didn’t see coming) and it helps in what (Thank God) is a well, well earned HEA. Cheers