A short read but decades in it's telling 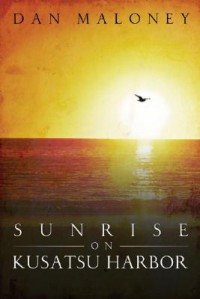 Opening line: “I have always loved my wife”

Wow, this was one of those short sneaky books that you devour in a day and then can’t stop thinking about. At about 130 pages SUNRISE ON KUSATSU HARBOUR has a huge story to tell and with about 200 more pages it would have made for an epic read. As it stands though it felt rushed and important events that I would love to have read about in greater detail were glazed over. However the narration style almost dictates this as it's the retelling of a story from a third person and the underlying message does still manage to shine thorough.

Sunrise is a frightening, tragic and haunting story of star crossed lovers. Encompassing love and hate, revenge and prejudice but most of all forgiveness. It’s a small book with a big message and a twist at the end that will really leave you wondering. I also think that this book would make for a fantastic movie, regardless I’m just glad I found it.

We begin with a man finding a video tape at a garage sale. Instead of the tape containing the movie he was expecting it instead shows the confession of an older Japanese man. And so our story begins with the writer of this tale telling us Meiko’s story via the video diary. Taking us back to Japan during the 2nd world war where we watch a young couple fall in love and make plans for a promising future together. One fateful day our hero Meiko is called to serve in the army, he pledges his undying love to his girlfriend Tori on Kusatsu beach, vowing to always be true to her and return and get married as soon as Japan wins the war. Meiko then leaves his peaceful village in Hiroshima to help create biological weapons for the war effort.

So, now that we know where they are, we all know what’s coming next and it was very interesting to see life from the other side of the war. On the day the US drops the atomic bomb on Hiroshima, Tori is in Kusatsu harbour, missing her man. The blast knocks her from the beach and into the ocean saving her life. However everyone and everything else she has ever known is now gone. Deciding that she must try to find Meiko, Tori then travels many hundred miles to where he is stationed in Nagasaki only to learn that just the day before Meiko went AWOL and is now trying to find her back in Hiroshima.

That is when the 2nd bomb drops on Nagasaki, leaving Tori alive but horribly burned and disfigured. She is hospitalized for a long time. Meanwhile Meiko has of course not been able to find his true love and can only assume that she is dead. When the Emperor of Japan surrenders Meiko makes his plans for revenge, sailing out of Kusatsu harbour on a boat bound for America. Little does he know that the figure watching from Kusatsu beach is his Tori. As I said this a star crossed lover’s story and our couple cross paths many times before finally meeting again far away and under unusual and fateful circumstances. For such a short read this book is decades in it’s telling with Meiko paying a huge cost for his revenge. Not easily forgotten.