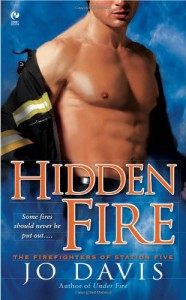 Opening Line: "Julian Salvatore sprayed a steady stream of water at station five's ambulance, rinsing off the soapsuds and gyrating around the vehicle to "Life in the Fast Lane" blaring from the radio just inside the bay."

Hidden Fire is book #3 in the romantic, suspenseful and sexy firefighters of station five series. This time we get bad boy Julian Salvatore’s story. Often excluded by his fellow members in ‘A’ shift because of his aloof attitude and man-whore reputation, in actuality Julian’s hiding a terrible secret from his past and wants desperately to fit in with his crew. He’s also in love with a woman he met 2 books ago TRIAL BY FIRE A beautiful yet icy defence attorney who won’t give him an inch.

So far I’ve really enjoyed this series, I mean how could you not? With hard bodied firemen heroes, smoking hot love scenes, and exciting action-suspense storylines it’s always a great ride. Part of the fun in reading these books is also the anticipation of how many concussions/trips to the hospital/shootings/stabbings/drownings our heroes will have to endure before they get the bad guy and win the girl. Jo Davis just loves to beat up her men and it’s become a bit of a game for me counting the injuries. I also like how all the books are slightly connected with updates from past characters and continuing story arcs. Here we get to catch up with Howard, Zach and fan favourite Captain Sean’s ongoing struggle with the bottle.

Grace McKenna’s been trying to avoid Julian’s irresistible Latin charm and ongoing advances, yet despite her all work no play attitude she can’t seem to stop thinking about him. After witnessing his almost frantic reaction to her latest client Grace finally concedes to a date, realizing that theres more to this sexy stud muffin then meets the eye. Julian is of course thrilled however this former ladies man has just fallen for a commitment-phobe and its going to take a long time for her to return those 3 little words he's dying to hear.

Of course while this romance is taking place theres also a serial killer on the loose, with violent ties to Julian’s past and now it appears a hold on his future as well as he’s set his sights on Julian as his next victim. As much as I enjoyed the romance here I also really liked this chilling suspense storyline which was frightening, thrilling and in the end, with the disclosure of the killers identity, urprising too. We’re also introduced to police detective Shane who I’m hoping to see more of in future books.

My only real issue here were the love scenes which tended to read more like erotica then romance. I’m not complaining, they’re hot but they tended to also feel gratuitous and slightly out of tune with the general feel of the book. Grace receiving oral sex on the couch before they’ve even been on a first date was strange and came (pardon the pun) out of nowhere. Then they decided they were just going to be friends. There was also Julian’s weird domination/anal play issue. This just felt out of character for him especially since it was their fist time together and he had been all soft and lovey-dovey moments before. Anyways…

There are still a couple of hot firemen waiting to have their stories told, LINE OF FIRE is up next in this recommended series.