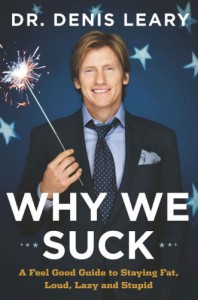 Many of my friends were curious about this book and asked me if Leary comes across like an a-hole in it. I assume they’re asking because he generally has a dark, angry style of comedy and his stand up routines contain a lot of yelling and ranting. My answer is no. Providing that is, you keep an open mind, are able to laugh at yourself and check your politically correctness at the door. Leary just states it like it is and tells a little truth about the sucky side in all of us.

I laughed while reading this. I mean really laughed, out loud and then started quoting parts to everyone, including my 67 year old mother who’s now reading it (and laughing). So if you’re a fan of Denis Leary then I can’t recommend this part memoir, part self help tirade enough. Surprisingly there were even sections that helped me, specifically when it comes to understanding how men’s brains work and why they do (or don’t do) what they do. And if you ever need a recipe that calls for 6,000 potatoes he’s got you covered.

Denis starts things out by giving an overview of what he’s going to talking about in the book. These first few chapters were mostly ranting and I wasn’t all that impressed but then he seemed to calm down and possibly even sat down at his computer, gave his mum a call and started to tell a real story. It then becomes a really interesting memoir with hilarious stories about his Irish Catholic upbringing. We learn about his fear of Kung Fu and fascination with the Vulcan nerve pinch. How his older brother beat the crap out of him and why he was lucky to make it out of childhood at all. He even gives us some amusing recipes from his Ma’s special Irish collection.

The middle part of the book moves away from the bio angle and becomes more of an observations about life; raising drug free kids (or not?), sports, his love of dogs and why cats are satanic spawn, guy friends and nicknames, politicians, pop icons, double standards, racism and why he loves Oprah so damn much.

Some parts that stood out for me were his hilarious tirade about Starbucks, how to interpret guy speak and what men are really thinking when you ask the question “What are you thinking?” (You don’t want to know) This section comes complete with an image of the male and female brain, broken down into compartments for importance of thought. Theres also 8 pages of photographs which include shots from his childhood, his wife and kids, Domina Patrick the race car driver (?) And a comparism between him and Willem Dafoe. Hmmm.

Like I said this made me laugh and yes at times it does come across like a comedy routine but it’s also a whole lot more. Besides anyone who’s been with the same woman for 25 years, obviously still adores her, has raised normal children and phones their mum regularly can’t really be an a-hole