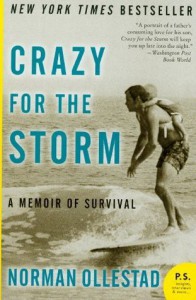 Opening Line: “February 19,1979. At seven that morning my dad, his girlfriend Sandra and I took off from Santa Monica Airport headed for the mountains of Big Bear.”

Set amid the wild uninhibited surf culture of Malibu and Mexico in the late 1970’s, Crazy For The Storm is a fascinating memoir that was hard to put down. It centers around 11 year old Norman Ollestad and the complicated relationship he had with his father. Demanding, charismatic and free-spirited, it is ultimately the thrill-seeking lifestyle and continual test of skills that Norman Senior puts his son through which are responsible for saving his life, when the chartered Cessna carrying them to a ski championship goes down in the California mountains killing everyone else on board.

This devastated 11 year old must then descend the treacherous icy mountain alone. Relying on tools subconsciously learned from an early age and with the voice of his father echoing in his ears “Go for it Boy Wonder. You can do it.”

“The fog undulated, as if breathing and it lifted off the snow for a moment. Fifteen feet across the slope the pilot’s shoes wandered in disparate directions. His legs twisted in the snow. The hem of his shirt folded back and his belly was pale. Am I still asleep?”

Now obviously if I’m reading his memoir then I know that Norman survives but there is still a huge element of suspense maintained throughout this story. The initial scenes with the plane crash are so riveting that at first I was super annoyed when the author decided to start alternating chapters back and forth between his life leading up to the crash and the hours directly after, I wanted to stay at the crash site. I’ll admit though I soon became equally engrossed in Norman’s unusual upbringing in Topanga beach, with its hippie culture, surfing lifestyle and his Mothers alcoholic and often violent boyfriend. Plus you never knew what adventure his father was going to drag him on next.

There are several chapters devoted to a road trip he took into Mexico to deliver a washing machine to his grandparents. With his father’s mantra “This is life Ollestead,” they end up broke, on the run from trigger happy Federales and finally hiding out in a village eating mangoes and surfing the perfect waves while they try to figure out how to get their car fixed.

His father may have been a charmer but he had dubious ideas when it came to parenting (the cover photo shows Norman at about a year old strapped to his father’s back while he surfs) He often placed his son in danger to challenge him and Norman both resented and idolized him and in my opinion was more than a little afraid of him.

While the writing is fantastic it does tend to get a little technical with the skiing and snow terms and I had a hard time visualizing the crash site (the slope -a curtain of ice) so that I never really had a clear picture of what he was facing. From what I understand it does however contain some very good “surf writing”.

I’m a real fan of true-life survival stories but this turned out to be more than a tale of adventure. Powerful and unforgettable, at its heart this is the story about the complex bond between fathers and sons, nurturing and teaching and what we pass on to our children. Leaving me close to tears at the end as we watch a grown Norman teach his own son how to ski and face his fears. Cheers