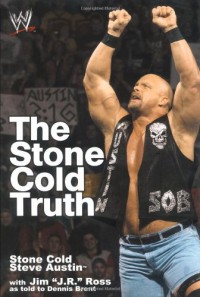 Opening Line: Damn, I think I’m dying, dying for sure.

Okay first off this is not my usual reading fare (the cartoon skull at the beginning and end of each chapter should have clued me in) I’m not a Wrestling fan, I only knew who Stone Cold Steve Austin was because he was everywhere in the late 90’s and I have two younger brothers. In going over this book for my review I realized it was going to be very hard not to rip it to pieces what with all the skulls and awesome little quotes like this one:

“DTA, you stupid piece of trash. Don’t ever trust anybody. You ain’t gonna be my partner…never! ‘Cause you are a longhair freak, and you suck!

-Austin to Mankind, after giving him the ‘stone cold stunner’ (which I now know how to do should I ever feel the need.)

Why did I read this you ask? Well you see I was trapped at a secluded fishing cabin for a week without power, in the rain and I ran out of stuff to read. This just happened to be lying around (I guess its good fishing material?) Anyways due to the short chapters, cold weather, absence of television and amount of cool pictures involved, before I knew it I was done. So I’m going to try to review this impartially, from the point of a 12 year old boy and wrestling fan. Which is I’m sure who it was aimed at, not a forty year old romance reader. Oh in case you were wondering the fishing was great.

We begin with Stone Cold preparing for his final fight in WrestleMania against The Rock (yum!) Steve’s having a bit of an episode from the amount of energy drinks and coffee he’s been ingesting and may just be having a heart attack. (FYI Chapter one is 8 pages long and contains 2 skulls, 3 almost full page photographs and a POV from his mentor Jim Ross) Then for Chapter two (which is 4 pages long) we go way back to the beginning, briefly following Austin’s childhood, growing up in Texas. He talks about his family, his brothers and love of sports; football and tennis in particular. Repeating often how important it is to respect and listen to your parents and stay in school. About 30 pages in Steve drops out of college and goes to Wrestling school and the rest as they say is history.

Well sort of. We also get tidbits from his early career when he was on the road and didn’t have any money, surviving on potatoes. Theres lots of stories about promoters and other wrestlers he met along the way into the WWF. He talks a bit about drugs and friends lost, feuds in the business and what really went down. We meet his first wife, second wife and third. We learn the story behind the “What?” gimmick, “Hell yeah”, the middle finger salute and why its more fun to be heel then a baby face (even though you’ll sell less merchandise) He also discusses his numerous injuries and what he would change about the wrestling business.

In the end I think one of my biggest problems with this book was that it was just assumed that you knew all the background behind any of the stories he was telling, so he only ever told half the story. As a wrestling fan I’m sure the half you get is awesome but as someone reading it just for the biography aspect it was a little confusing. Can anyone tell me what he was on probation for? I also never felt like I got to know the real Steve Austin. There wasn’t any insight given into his personal life. As I said theres a ton of freaking photos, like every page, as well as wrestling quotes, letters and documents all interspersed with commentary from his mother, father and good friend Jim "J.R” Ross. oh and all the skulls.

And that’s the bottom line cause Stone Cold said so.