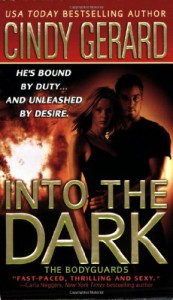 Opening Line: “It was quiet. Maybe too quiet.”

After giving 5 stars to every book in Cindy Gerard’s Black Ops series I finally went back to where it all began and caught up with her Bodyguards. This book is the last in that series (#6) and it’s where the two finally converge with the appearance of my favourite bad boy Gabriel Jones, (Show No Mercy) along with cameos from Johnny Reed (yum) and Sam Lang. And on that note as soon as the BOI’s show up they kinda take over the story, with our couple fading into the background while Gabe kicks ass and argues with his future wife.
Cindy Gerard really can do wrong when it comes to the romantic suspense though, with nail biting action, exotic locations, sweet lovin and just top notch writing. She also manages to include some of the most touching dialogue I’ve read (gotta love those tortured heroes)
Special-ops soldier Dallas Garrett has been retired from the Marines for six years but he’s still suffering from the images he thought he’d buried and the men he lost. Lately he’s been thinking about the woman that got away too. Amy.
After rescuing her from terrorists and unspeakable horrors in the Philippians he brought her back to the states, fell in love and then she disappeared, determined to leave her past behind. Dallas never planned on seeing her again, too much baggage on both their parts. But now she’s here on his doorstep in the middle of the night. Soaking wet, bruised, exhausted, sporting fake ID and a discharged firearm. She’s on the run and she needs his help.
Amy Walker was first introduced in book #3  (To The Brink) where she was rescued by Dallas and his brothers from EDEN inc. Since then she’s been honing her skills, learning to fight back and trying to discover the truth about why she was kidnapped and the mind control experimentation that’s placed her mother in an institution. Now the bad guys have caught up with her and there’s only one man who can help.
For some reason Gerard does a lot of telling and not showing here, with the chapters beginning on an airplane or in the midst of a shootout on a Argentinean street before going back and explaining how they got there. If I’m honest the Manchurian Candidate storyline wasn’t one of my fav’s and the romance was kinda lukewarm until the closing chapters when Dallas finally figures out he’s good enough for Amy even with all his scars and PTSD. Their reunion is absolutely beautiful though and I’m not usually one for the sappy.
“I like a man with scars. I like a man who looks in the mirror and sees himself for who he is. For what he is. An imperfect person in an imperfect world."
Cindy Gerard jungle fever kickass heroine men in uniform monsters reunited romantic susp shelf 14 tortured hero