Damn these bad 80's style covers are killing me 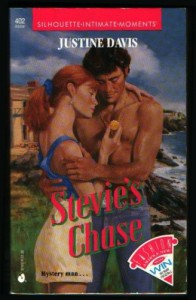 Opening Line: "As soon as she heard the sound, Stevie knew without looking that it was the mystery  man."

Stevie’s Chase was a super little read that really surprised me, I mean I wasn’t expecting much based on the cover however I was blown away by the depths of this love story. In fact the entire (Holt) series is just fantastic especially if you’re anything like me and have a thing for the tortured heroes and the angst. Oh the angst. It literally drips off the pages here as we watch our tormented hero Chase try (unsuccessfully) not to fall in love with his neighbour Stevie.

I adored this couple; I mean I was really pulling for them. Davis manages to get right into their heads, writing some of the most poignant and extended (due to all the introspective feelings flying around) love scenes I’ve ever read. And while I admit that this was a bit slow in getting started I really enjoyed the fact that Chase’s “dark” past wasn’t revealed right away. In fact Davis keeps the reader guessing until almost the end of the book as to all of Chase’s secrets. Who is after Chase? Why is he on the run? What’s the deal with the scar? Is he a bad guy? The biker dude persona and gun tell us he is yet he’s so troubled and selfless when it comes to love and nothing like his outer bad-boy exterior suggests. Theres a scene where Chase leaves Stevie to keep her away from the nightmare of his past and … jeez it just kills me to see tough guys cry. Anyways I’m ranting here, this was a really great read; moving, well written, suspenseful, anguished and oh so romantic.

Chase Sullivan is very aware that getting close to anyone means putting their lives in jeopardy. He’s made that mistake before so despite the fact that he lives in a close knit apartment complex he keeps himself to himself, there are no pleasantries with the neighbours, not even the beautiful strawberry blonde, Stevie that lives next door and keeps him awake at night wishing things were different.

When Chase falls ill it’s Stevie that nurses him back to health, following his no hospital rule without question. It becomes just the two of them, allowing Chase to let down his walls for the first time in years and feel a little goodness and light in the form of his sweet neighbour. He’s been so lonely and despite trying time and again to push her away Stevie accepts his strange habits and no questions asked policy and they fall for each other. Big time. Now while Stevie is kinda written as the perfect heroine it worked for me here because she’s not an idiot either.

Eventually Chase’s past does catch up with him and as I mentioned earlier he leaves to protect her in an absolutely heartbreaking scene. And its not until Stevie begins her search for him that we that we finally learn the extent of this deep dark past. The ending held quite a few surprises for me and then just when I thought HEA had been reached Davis pulled out one last suspense card.

The next 2 in the series Left At The Altar and Morning Side Of Dawn are also super good.