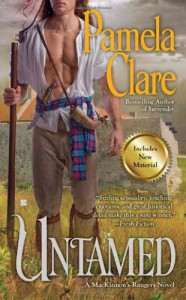 Opening Line: “Major Morgan Mackinnon lay on his belly, looking down from the summit of Rattlesnake Mountain to the French fort at Ticonderoga below.”

Och lassies, Pamela Clare has done it again. Tis no fair, I dinnae ken i twas possible for her to top the sheer bonnie-ness of Surrender (I’ll stop now) or that she could possibly create another hero capable of capturing my heart the way Iain did (yes Iain of the hundred lashes Iain) but then I hadn’t properly met his brother Morgan yet either and damn if this brave, sexy Mackinnon brother hasn’t also stolen my heart.

Yes, Untamed is equally as good as the first book and in some ways I suppose even better because I’m now more familiar with the Scottish brogue and also have a better understanding of the French/British war being fought in the Colonies of 1759. This book was also interesting on a personal level because I have family in French Canada so I enjoyed reading the heroine Amalie's Français and some of the history as to why my country is bilingual. As others have mentioned this also sent me on a historical search (which a romance novel has never done before) to learn more about the battle of Trois Rivières and the time period in general.

There isn’t a whole lot I can add about this amazing series as I’m a little late to the party and there are already so many great reviews out there. All the praise is worthy though; Pamela Clare is simply an amazing writer, giving us characters that you won’t be able to let go of. The romance here is just perfect; sweet, passionate (hello waterfall sex), tear jerking and sighworthy. What a fantastic couple. In fact I loved everything about this; the suspense, the humour, the language, the history, the secondary characters (Joseph, Connor, Iain & Annie, the Rangers and even William) I was also never certain where this story was going to go, jeez the choices Morgan was forced to make, eventually becoming the enemy of both the French and the English.

Untamed starts shorty after Surrender and sees Scottish warrior Morgan MacKinnon still reluctantly fighting for the English. Upon his brother’s release Morgan is now in command of the Rangers and in the opening chapter we join him in the midst of a horrific battle, which see’s our boy gravely wounded and taken hostage by the French. His loyal Rangers assume he’s dead (or soon will be) and are so moved by his final heroics that they write a ballad in his honor (Loved it)

Incapacitated, Morgan is shackled to a bed where the French plan to interrogate him before turning him over to the Abenaki -who will then burn him alive for crimes against their people. It’s not looking very good for ole Morgan. Bearing two festering musket holes he wills himself to die rather then turn traitor on his men or burn at the stake, but it’s not going to be that easy. Enter his nursemaid, sweet, innocent, young and beautiful Amalie. Raised in a convent and now upon the death of her father (at the hands of British) the ward of Chevalier de Bourlamaque who will either see her returning to the nunnery and marrying god or one of his chosen French officers. Amalie however has other plans and has decided that this man must live.

“Morgan fought the urge to touch her, crossed his arms over his chest.
“You have no’ answered my question, lass. Why are you here? And dinnae tell me it’s the summer heat that brings you, for ‘tis hot in my bed too.”
She looked away again, distress on her face. ”I…I needed…”
“Needed what?” He knew the answer, but he wanted to hear it from her.
When she spoke, her words were but a whisper “I needed to be…near you.”