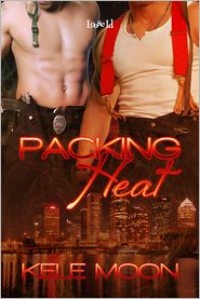 Opening Line: I'm a big advocate for gay rights. I'd vote for gay marriage if it ever came up on the ballot."

I also tend to like my M/M with manly men and Packing Heat gave me that and how, with two very alpha, very masculine, very sexy men in uniform. Sheesh.

Actually for such a smut filled short story I was surprised by the depth of character we got. Brad’s horrific outing as a teenager, fear of commitment and unique sexual hang-ups were definitely a bonus and Gavin’s admission of “The older he got the more he leaned toward the gay side of bisexual” just made me realize that dating is confusing no matter what your orientation.

Police officer Gavin Connolly is shitfaced. A recent shooting at work has left him with some unexpected leave and now he’s got too much time to think. Too much time to worry about the kid he shot and way too much time to ponder how sexy he finds his roommate. Yeah Brad, his openly gay, gorgeous, firefighter roommate. He’s had a thing for Brad for years. I mean its why he moved in with him in the first place except Brad has never shown the slightest bit of interest. Tonight’s going to be different though, Gavin’s had just the right amount of too much too drink and is also just stressed enough that he’s stopped caring about the consequences. Tonight he’s going to act on the sexual tension that’s been building for months. Sure he may get rejected but he might also get what he’s been dreaming about too.

Brad Archer can’t believe that his seemingly straight roommate has just launched himself onto his lips and into his lap. Now he remembers why he keeps his distance from Gavin, the guys too f-ing handsome for his own good. But his patience only goes so far and months of watching Gavin strut around in a towel have taken him too the limit, if that’s how Gavin wants to play so be it.

"You want it from a man? You’re gonna get it the way I like it. Let go of your dick or go find yourself a girlfriend.”

Yeah this is one hot and naughty little read. There isn’t time for any real story development instead we focus more on what happens after the roomies take their relationship to the next level. Gavin just assumes there’s a future for them and is more then willing to come out. Brad on the other hand has some series issues from his past to deal with and only sees this as a fling especially since Brad is Bi. My favourite scene would have to be when Gavin handcuffs Brad to the bed and forces him to give up control and trust him. It’s kinda heartbreaking actually but also sexy as hell.

The I love you’s are fast coming but still plausible and the epilogue; getting to see their HEA at work in the future was just the icing on the cake. Cheers.