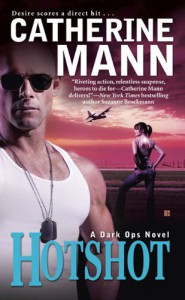 Opening Line: “Major Vince “Vapor” Deluca didn’t need to ask if there were Harleys in heaven.”

Hotshot was an okay read for me. I’d been looking forward to it after enjoying the first book in the series so much, and of course I was intrigued by our pilot hero Vince Deluca, who is described as a tattooed, former bad boy biker, now part of the Air Force’s top secret squadron of test pilots (AKA Dark Ops) I mean yum.

Unlike (Defender) this book has no real military action or exotic locations which are what I’d been anticipating and enjoyed so much about the 1st book. Hotshot takes place entirely on US soil, with our hero on leave. I also had a hard time getting into the whole plot line involving troubled youth and gangs which then somehow segued into terrorism. And while there was nothing wrong with our couple de jour I just never felt “it” between them and was actually more interested in the secondary romance going on between the heroine’s father and his FBI co-agent. For me they upstaged the main romance (complete with hot, breaking the furniture love scenes) and when that happens you know it’s not a good sign.

When Major Vince “Vapor” Deluca receives a message from his former mentor (the man responsible for getting him into the Air Force and turning his life around) he doesn’t ask too many questions he just does. Before he knows it he’s responsible for protecting the man’s daughter. Trouble is, the daughter is someone from his shady biker gang past, someone he’s never been quite able to forget. And while it has been 17 years he can’t believe that she’ d now be involved in terrorist activities which is what the FBI thinks. She’s also getting ready to testify in a congressional hearing involving the recent escalated gang activity so she’s in deep do-do because the gangs aren’t going to sit by and let that happen.

Shay Basset is a nurse volunteering in her spare time at a youth center in a not so nice part of downtown Cleveland. Manning the suicide hot line is a job she takes very seriously, having had issues herself growing up she can relate to her callers. Vince is the absolute last person she ever expected to see walking in the centers doors and seeing him again just brings back everything from her painful and desperate past on so many different levels. But damn he looks good with a shaved head. (loved the reason why he had a shaved head) and just maybe it’s time they put their unresolved past behind them. Before long Shay is dodging multiple attempts on her life and her and Vince are on the run.

I have to say this did get better as things went along but all in all a completely forgettable story with an over-the-top ending. And what was up with the spy cameras in the bees and spiders? Really!