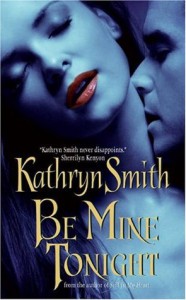 Opening Line:" It was obvious the door was not meant to be opened."

This is one of those books that you either love or hate and while I didn’t love this it did manage to redeem itself enough so that in the end I didn’t hate it either. Set in 1899 (which for some reason I didn’t know until I started reading) Kathryn Smith knows her stuff when it comes to writing a historical. The attention given here to the clothing, home trappings, servants and ones status all make for a rich and well written novel. However my mind wandered… a lot, as I grew bored with a story that took forever to get going and conversations that had as much internal dialogue as spoken word. I also felt that Smith was unsure of where to take her story; giving us hints of a great protagonist but never utilizing him, removing central characters for no apparent reason and throwing in several erotic sex scenes which were appreciated but felt gratuitous.

The story begins in 1307 with a group of King Philips soldiers locating what they believe to be the Holy Grail and drinking from it. In actuality they have stumbled across something truly evil and its contents have now transformed them into blood lusting, sun sensitive immortals or Smith's version of Vampires. Travelling forward we enter England in 1899 and are introduced to Prudence who along with her friend Marcus is on a hunt for the lost Holy Grail. Pru’s quest is somewhat personal for she hopes that the Grail will prolong her life and cure her inoperable cancer.

Prudence lives with her family in the English countryside and it’s at the family manor that the entire book takes place. Starting at a dinner party Pru is introduced to Chapel who works for the church and has come to visit out of interest for the Grail. Chapel although charming is your typical self loathing Vampire, thinking he’s a monster and certain he’s going to hell (yawn) I did however like him because he’s sexy and also just tortured enough to capture my attention. Of course our couple are immediately besotted, spending their evenings together and falling in love, although because Chapel considers himself a monster he refuses to ‘change’ Pru and a moral battle ensues as Pru grows sicker and after 600 years Chapel finally learns to live.