One of my top tortured heroes of all time 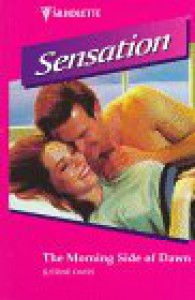 Opening line: "She was the most beautful thing he'd ever seen."

*Shame about these older Harlequin covers, they sure don't age very well*.

I have no idea where I picked this book up but what a fabulous find especially if you’re anything like me and have a soft spot for the wounded heroes. Written in 96 and the last in a trilogy (which I’m now actively searching for) TMSOD contains one of the most seriously shut-off and tortured heroes I’ve come across since JR Ward’s Zsadist.

Dar Cordell is bitter, standoffish, intimidating and often just downright mean. Allowing precious few into his inner circle, and even those he manages to keep at arms length. Dar is also impossibly handsome, a superior athlete and a double leg amputee, preferring a wheelchair to his seldom used prosthetics. This is one hero with a serious chip on his shoulder, belittling and biting out at everyone while using his missing legs as an excuse to shut himself off from the world.

Still, Dar would have to be up there with my top tortured heroes of all time because given the right circumstances (as is the case here) this unlikely romantic lead quickly gains your sympathy. So that despite his attitude he becomes desirable as you gain understanding as to why he is the way he is. And as it turns out Dar’s issues have very little to do with his legs.

The actual story here is pretty standard Harlequin romance; following supermodel Cassie “Cassandra” Cameron as she grows tired of the superficial world of modeling and escapes to her brothers for a much needed vacation. Of course then we have her stalker, and when he catches up with Cassie the only place she has left to turn is to her brother’s friend Dar. Forcing this reluctant couple together while the police investigate.

I really liked Cassie, despite her supermodel status she reads like a real person, managing to call Dar on his crap, which is just what he needs. As it turns out she‘s just as stubborn as he is and faces some of the same issues too, with the public just assuming she’s nothing more then her looks.

The sparks really fly between this couple with a palpable level of sexual tension throughout, despite the fact that Dar continually pushes Cassie away because he just can’t believe she would ‘want’ him. However when they finally make it into bed lookout, its smoking hot and sweetly intimate.

You can definitely tell that Davis has done her research here as we learn about the different types of wheelchairs (Dar designs racing chairs) hand controlled driving, and what it feels like to be looked down on or just looked through. And because Cassie moves in with Dar we also learn about modified kitchens and bathrooms, wheelchair ramps and accessibility issues in general.

All in all I loved this story and if it wasn’t for the authors annoying overuse of the word “Chagrin” this would have been a 5 star read. Cheers people!