Better than 'Covet' but still no Black Dagger Brotherhood 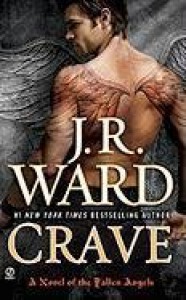 Opening Line:"Hey! Wait a -- Save that shit for the ring!"

CRAVE is book #2 in the anticipated Fallen Angels series and while this still aint no Black Dagger Brotherhood with this instalment the WARDen seems to have at least found her groove, and I feel way more invested in the series as a whole now then I did after reading COVET although I’m still not in love with it (does that make sense?)

Continuing 4 days after the end of COVET, Fallen Angel Jim Heron finds himself in familiar territory as the soul he has to save this time around is that of AWOL Black Ops soldier Isaac Roth. The back story here is extensive as Jim and Isaac share a history together, both having served under the treacherous leadership of Matthias. When we begin Isaac is making some quick cash as an underground cage fighter. After the ring gets busted Isaac lands in jail where we meet his beautiful, court appointed defence attorney Grier Childe.

Despite their differences (or maybe because of) the sparks fly with Grier going so far as to post his bail using her own money. With Isaac now free he plans on disappearing and fast the only problem is he owes Grier and can’t seem to get her out of his head even though he knows all he could possibly bring her is trouble. When Jim and his fallen sidekicks make contact Jim realizes that its not just Devina stealing his soul that puts Isaac in danger but their former commander Matthias has put a death sentence on his head, because the only way you can leave their covert little organization is in a body bag.

Also as per usual with Ward there are numerous characters vying for POV time and as always she handles this seamlessly. Popping us back and forth between the hero and heroine and into heaven and hell in the minds of angels, demons and anyone else caught in the crossfire of battle #2 this time around. All the returning characters get fleshed out (some even get wings) so you learn more about Jim Heron as well as his intriguing but still somewhat vague angel sidekicks Adrian and Eddie. Even dog makes an appearance. We also get into Devina’s warped and evil head and she’s proved to be surprisingly interesting.

Of course this book is full of F-bombs and Wards own unique brand of slang which I usually enjoy. However this time there are just so many “Wardisms” that I found myself getting side tracked trying to figure out exactly what she was trying to say in her riddlesque product placement kind of way.

"A gust of wind went Nike across the landscape" This is fun a few times then it just gets dhistracting.

Crave is definitely darker then Covet with some scenes that are downright disturbing and I will tell you (because I drove myself crazy looking) that there aren’t any Brother sightings this time around except for the mention of 'sKillerz' but I’ll let you figure that one out on your own.

For me Crave effectively advances the series as a whole, tying everything together so that I could see the big picture. So that even though each book will deal with a different battle of good and evil it’s really the end game that counts and the ending this time around is …surprising.