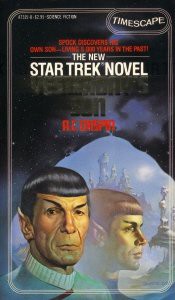 A while ago I caught the classic Star Trek episode 'All Our Yesterdays' on late night TV and got sucked right into the story. As well as just how awesomely cheesy the original series is (I really have to watch it more often) Anyways, I happened to mention the episode to my long time Trekkie Mum who found this tie-in book tucked away on a dust covered shelf (amongst hundreds of others)

YESTERDAY’S SON is a continuation of sorts to that original TV episode All Our Yesterdays, playing on the what-if scenario that Spock and Zarabeth’s little indiscretion 5,000 years ago (due to Gateway Time travel) resulted in a child. (It seems Starfleet doesn’t issue condoms)

Now Spock goes back to the planet Sarpedion and using the mysterious time portal meets his 5,000 year old son. Time travel is so much fun, anything is possible. And while this is way out of the realm of what I usually read, I have to say that I enjoyed it. It’s a well written, clever story, capturing the essence of the original series perfectly while giving us a peek into the minds of our favourite characters.

The author obviously knows her Star Trek, managing to include mention of several other episodes along the way which will have Trekkies smiling. There’s a good amount of action involved here including a strategic space battle with the Enterprise outnumbered by the Romulan fleet Go Scottie! and some good old fashioned hand to hand combat too. We also get a ton of Vulcan history - is there like a bible of this stuff somewhere?

All the characters are represented in one way or another, remaining true to form. Kirk in all his Captainly awesomeness, Bones who is less grouchy then I remember, taking on a more father like role here and Spock who I honestly didn’t like very much. His character is cold, heartless condescending and frustrating. Yeah I know he’s Vulcan and emotionless but he’s also an a-hole. We also get a glimpse of some doomed red-shirts and spend just enough time with Scotty, Uhura, Chechov and Sulu to make it feel like a real episode.

Speaking of Sulu, he has one of my favourite lines from the whole book which is only ironic now 20 years later. He and Uhura are discussing how much Zar and Spock look alike

"Have you ever looked into Zar’s eyes?” Uhura leaned forward a little, lowering her voice.

“No--other men’s eyes don’t do anything for me, I’m afraid” Sulu grinned.