Epic dystopian, super long but worth the effort 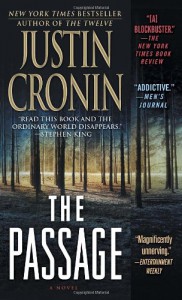 Opening Line: “Before she became the Girl From Nowhere --the One Who Walked in, the First and Last and Only, who lived a thousand years—she was just a little girl in Iowa, named Amy."

I wanted to give this 5 stars because it is pretty damn fantastic; the complex story, the imaginative and often beautiful writing, the suspense, the hopelessness, but oh my god it’s long. At around 900 pages it took me over a month to read and towards the end became more of a goal to finish than anything else. I was so ready to move onto something else but didn’t want to miss a thing either.

The Passage also reads like two totally different books with the first part taking place pre-apocalypse, as the virus/cure is discovered, developed, tested on several subjects and followed through it’s epidemic. It then jumps several hundred years into the future and several generations of survivors later as we follow them in their new scary world.

There is a huge cast of characters to follow in both ‘parts’ (very Stephen Kingish that way) and I enjoyed them equally. Along those lines I would categorize this as an apocalyptic masterpiece reminiscent of Kings The Stand, or Robert McCammon's Swan Song including suggestions from Salem's Lot, Cormac McCarthy's The Road and a bit of Walking Dead thrown in for good measure.

It’s definitely worth reading but you’re going to have to make a commitment.