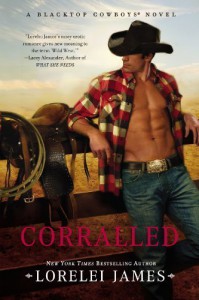 I was pretty excited to hear that Lorelei James’ was starting a new series because I’m seriously addicted to her Roughriders books and IMO you can‘t ever have enough sexy cowboys. I also have a small addiction to the PBR and CORRALLED is all about the bullriding and its fearless bullfighters. Throw in a ménage storyline (yes girls, two swaggering, ultra sexy cowboys) and in theory this book should have had all my guns a blazin’. Unfortunately, and I can’t put my finger on why, it just never grabbed me like her Roughriders series always does and I was surprised by how difficult it was for me to get into her new Blacktop Cowboys.

One of the problems for me was the rodeo jargon, I kept forgetting what EBS and CRA stood for and these acronyms were used a lot. I also felt like I’d read this before as the storyline is very reminiscent of her first Roughriders book Long Hard Ride leaving me with a feeling of déjà vu for the entire read.

“As much as Hank loved bullfighting in the CRA, for a bullfighter, the EBS was the big time.”

Lainie Capshaw is a sports therapist, traveling the rodeo circuits and patching up injured cowboys. She’s made it a steadfast rule not to date anyone, keeping things strictly professional amongst her many admirers. So it’s with some surprise that she finds herself dating not one but two handsome cowboys; Hank Lawson a bullfighter and Kyle Gilchrist a bull rider. Despite never discussing exclusivity Lainie feels guilty but also doesn’t assume she’ll have to decide between them as they work on different circuits. Honestly she doesn’t know if she could choose anyways.

Lainie’s two timing catches up with her one night at the local honky-tonk when Hank catches her with Kyle. To her surprise the two are childhood friends and since neither wants to bow down to the other they instead offer her a deal no horny cowgirl could refuse. They will all travel the CRA circuit together with Kyle and Hank taking care of Lanie's sexual needs until she makes up her mind which one of them she likes better. It sounds good until both men try to win her heart leaving Lainie hanging on for the full 8 seconds. What’s a girl to do?