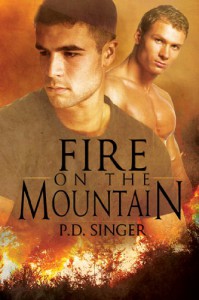 Opening Line: “Fires would be part of my summer-I’d know that even before ever getting up to the mountains.”

This was a fantastic little find (thanks D) containing not only a very satisfying friends to lovers romance but complete escapism due to J.D Singer’s vivid descriptions of the Colorado park setting and obvious research she’s put into forest firefighting. Her descriptions are so accurate that at times I was shaking my head, is this author a fire ranger in her spare time? We also get some absolutely breathtaking action scenes so that by the end I could smell the smoke and wanted to wash the ash from my clothes. Oh yeah and then there’s the man love…

After a disastrous weekend college road trip sends our narrator Jake back into the closet, all he can think about is getting the hell away from everyone and everything until he can sort out his sexuality. A six month stint as a forest ranger in the mountains of Colorado sounds just about perfect; beautiful scenery, loads of exercise, lakes full of trout and a quiet, judgement free life in an isolated cabin away from it all. Sure he’ll have to contend with directing the odd tourist or scout group back to town, maybe even risk his life with a potential forest fire but hello adventure.

Arriving in the tiny town of Meeker Colorado Jake (for whatever reason) expects to be partnered up with a “crusty old mountain man” for his first fire season instead he gets “the” Kurt Carlson; experienced, popular, self-confident (because he’s good at everything) and gorgeous. Kurt is everything Jake wishes he could be and he’s immediately drawn to him in a hero worship sort of way. This is one friendship he can’t risk ruining though so for now he’ll just keep his emerging feelings and dirty thoughts to himself. We the readers on the other hand get pagefulls of lusty angst and masturbation (not that I’m complaining)

The two become fast friends, filling their time (and a good early portion of the story) with the day to day routines of forest ranging and dealing with potential fire hazards. Because Kurt already has a couple years under his belt he takes on the role of mentor, teaching this rookie all he’ll need to know about fighting fires and living in the bush. This is when Fire On The Mountain takes on a Brokeback Mountain sort of quality; it’s just two men cut off from civilization, living in their own little world, completely reliant on each other. Of course both assume the other is straight, dancing around the obvious signs they’re each putting out until a life or death situation forces the truth to the surface. They want each other.

Their first time together is…. oh yeah, finally! And then *big sigh* as a subsequent forced separation tugs at your heart. Jake unable to sleep unless he gets into Kurt’s sleeping bag; remembering the missed opportunities, overanalyzing the relationship. His anticipation and even fear of seeing that person again was so relatable. Will he still feel the same? Or was it a onetime thing? “I wanted to believe that night was more than the product of fear and impending death. I didn’t want to be the last novelty before oblivion”.

This was a well written, engrossing story and I can’t wait to see where this series goes from here. I should mention that Singer has also included the short story INTO THE MOUNTAINS, which takes place two years prior and is told from Kurt’s POV. It’s an excellent addition to the story as a whole, tying the two together and giving us a look into Kurt’s somewhat obscure character (due to the Jake’s 1st person POV) It was nice to finally get a look into his head and learn why he had some of the fears he did, It also arcs us back to how he first became a Ranger. If you’re at all scared of heights though, look out, this is one exhilarating story. Damn is P.D Singer a rock climber too? Cheers. 311jb4.