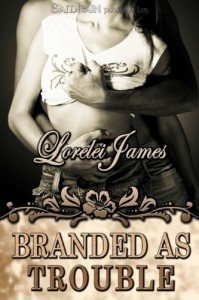 Opening Line: "In celebration of his first year of sobriety, Colt McKay climbed on the back of a bull and rode for a full eight seconds.

Welcome to another deliciously hot read from Lorelei James' Roughrider series. This is book 6 and I’ve come to the conclusion that James can do no wrong as each instalment is more addictive than the last. Somehow she always manages to keep the storylines fresh and the numerous sexcapades just different enough that they never feel formulaic or repetitive. We’re also guaranteed updates on our past couples (which I love) and here they show off their prolific baby making skills, makin me think that there must be something in that Wyoming water. With Colt and India we’re given a sweet fiends to lovers theme and anyone that’s followed the series will give a big cheer as our two black sheep finally find acceptance, unconditional love and unique uses for caramel, whipped cream and body piercings.

Reformed bad boy Colt McKay has been with us throughout, branded the troublemaker of the McKay family due to his womanizing, hard drinking and unreliable ways. By book 3. (Cowgirl up and Ride) Colt finally hit rock bottom, realizing after the death of his cousin that he needed help and entering recovery. Over the course of the next two books we witnessed Colt getting his sheep together with the support of his AA sponsor India Ellison who he’s also developed a serious crush on.

“Indy” as Colt calls her has also been with us for a couple of books now, as the tattooed, pierced, free spirited, wild child sister of Skylar (Tied Up Tied Down) She certainly doesn’t fit into the normal mould of a Wyoming rancher woman and makes no excuses for it. As a walking advertisement for her tattoo shop she’s been clean and sober for 8 years and for the last 3 has spent all her spare time with best friend and fellow addict Colt.

All that changes the night Indy shoots Colt in the butt with a nail gun. For whatever reason she finally sees him in a whole new sexy light (Personally I think it may have been the sight of his bare ass) but whatever the reason they decide to give dating a try. Neither of them wants to mess up their friendship though so they agree to take things slowly at first, with some proper old fashioned dinners, dancing and a strict no sex for 2 weeks policy. And that’s when the fun begins folks …just how far can they tempt and tease each other before somebody loses it?

We’re given plenty of almost moments and James does a great job here with hilarious internal dialogue as the pair wades into unfamiliar territory with strong, sober feelings neither has dealt with before. At the end of the dating period all bets are off, as belt buckles and cowboy boots hit the floor and some serious sexual frustration is released. Yeehaw!

This is a very fun and satisfying romance and although the endings kinda predictable I just loved spending time with the wild, sexy and charming McKay’s again.