Addictive mystery and then there's Roarke... 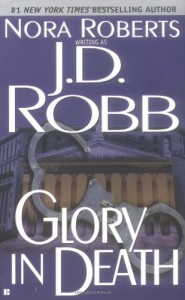 Opening Line: "The dead were her business"

I originally started JD Robb’s In Death series because it was recommended to me by well… everyone. And Yes it is good. In fact I ended up liking this 2nd instalment even more then the first, however (except for Roarke) I don't totally love it. The writing is top notch and Robb spins an easy to read dark mystery filled with lots of interesting suspects (including Roarke again) But I’m just not a fan of the police procedurals and therefore large parts of this book dragged for me. Particularly when Eve very dryly and very frequently interrogated the many suspects (these parts read like furniture assembly instructions) and in the end I couldn’t have cared less about whodunit. I was reading strictly for the romance and a certain someone named Roarke.

Sigh… Irish lilting, button carrying, patient, unwaveringly romantic, sexy, mystery man Roarke. If only he existed in the real world. Yes I have developed a serious literary crush on him and he’s what keeps me coming back to this series. I love how he is tough yet tender with Eve while accepting her unconditionally just the way she is.

Speaking of Eve, although I still find her character very difficult to like she does soften here some, allowing herself to gradually except the little pockets of peace Roarke creates for her. I’m also beginning to realize that Roarke is equally as damaged as Eve and that’s what draws the two of them together, making their developing relationship worth watching. One of my favourite parts of this book would be the afterwards of an explosive confrontation when Eve finally, finally lets Roarke in. (Well that and their little moonlit trip to casa del Roarke in Mexico)

The future aspect (its New York 2058) which I found unnecessary and gimmicky in the first book has been expanded slightly and while not distracting it does provide an interesting aspect that I enjoyed this time. (I really want an Autochef) There are also some great secondary characters here; and I particularly liked Eve’s troublesome relationship with Roarke’s man-servant Summerset and her wild, no excuses nightclub singing girlfriend Mavis.

GLORY IN DEATH sees Lieutenant Eve Dallas searching for a serial killer of prominent career women. Eve follows the clues and interrogates a lot of suspects, getting her thick skin bruised in the process. As the clues take her closer to those she cares about like Roarke and her boss, Eve becomes relentless in her search for the killer, putting everything else secondary. Its Roarke who sees how tired and overworked she is and forces her to step back and recharge (in his spa tub!) In the end everyone’s bloody, the killers caught (I never did guess that one but then again I wasn’t really trying) and damn if Roarke hasn’t set things up so I just have to read the next book (Immortal In Death). Cheers!