The best of the series 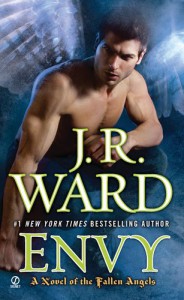 Opening Line: "It was in the spring,on a dark April evening, when Detective Thomas DelVecchio Jr. learned that nigthmares could in fact make the  jump out of the mind and into real life."

As others have mentioned this is the best yet from Ward’s Fallen Angels series. She seems to have gotten the mix just right here and I found myself completely caught up in the story, it’s romance and all the many sub characters and their ongoing battles. I suppose introducing the hero in the last BDB book didn’t hurt matters, as from the get-go I was wondering how a Vampire attack and Veck’s subsequent “memory loss” was going to be explained. However the two series feel very different to me now, and even though I can still sense the BDB world in the background, its no longer a distraction. (I do become a squealing fan girl when I find those cameos though) Speeding black Escalade in the rain or old landlord in a butlers uniform anyone.

I would describe this as a romance wrapped in urban fantasy. The mix works though, along with Ward’s usual hilarious male banter, excessive product placement, seriously hot love scenes and a few major surprises -which we should see the trickle down effect from for several books to come. I also feel that she finally got the romance right here; I enjoyed Veck and Reilly and found myself rooting for their HEA.

Lastly I have to mention Devina. She is just awesome, probably Ward’s best female character to date and a superb villain. Yes she is evil but she is also so much more, what with her therapy sessions, hoarding issues, insecurities and school girl crush on Jim -which let me tell you he uses to his full advantage. Alls fair in love and war bitch.

As with all of Ward’s books there are many characters fighting for POV time; popping us back and forth between hero and heroine, into heaven and hell and the minds of angels, demons and anyone else caught in the crossfire of battle #3. I can honestly say though that I didn’t ever want to skip any of their sections (Lessers) as each POV was an integral part of the story and more than held my interest.

Yes, the WARDen got it right with ENVY and I can’t wait to find out what happens next.

Homicide detective Thomas “Veck” Delvecchio is convinced he’s just killed a man. Haunted by the legacy of his serial killer father and followed by a dark shadow, it was really only a matter of time until he gave in to the dark side. The problem is he doesn’t remember the attack and the evidence says he’s innocent. Sent to monitor Veck is internal affairs officer Sophia Reilly whose interest in Veck grows increasingly personal as they share pizza and a mutual admiration for Victoria’s Secret.

Entwined in their budding romance is Jim Heron, now facing the 3rd round in the ultimate end game of good VS evil. He and his two back up angels have been given the task of battling against the devil for Veck’s very soul.

Bringing our group together is Reilly and Veck’s investigation of missing person Sissy Barton. She is of course being held by Devina (CRAVE) Jim is determined to find her body and retrieve her soul from hell whatever the consequences which gives him more reason then ever to shadow Veck, who’s own internal struggle is just beginning. Honestly I could go on and on about the plot. So much happens and I‘m not doing it justice here so I will stop. It is intricate, shocking, suspenseful, exciting, sexy and just well played. Cheers