One for the "keeper" shelf 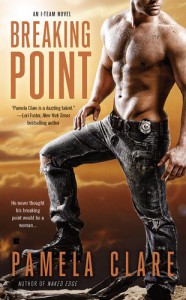 Opening Line: “Natalie Benoit watched the streets of Ciudad Juárez roll by the outside of the bus window, wishing the driver would turn up the air-conditioning.”

5+ stars!! You know those books that within the very first page, you can just tell you’re going to fall in love. It’s the right book at the right time and you get that excited feeling as you try to figure out how you can squeeze a couple more hours of interrupted reading into your day. Well you’ve found it.

Yeah Pamela Clare has outdone herself with this 5th instalment from the I-team series; I could not put Breaking Point down, what a freakin ride. The action starts immediately and just doesn’t let up. More than once I caught myself thinking how the hell are they going to get out of this? (Which is just silly because of course they’re going to get their HEA, this is a romance after all) but I was so caught up in the story. Everything about this was just perfect, starting with the cover (hello) the studtastic (and literally) tortured hero, the sigh-worthy romance, the sexy, sexy love scenes, the inclusion of Marc and Julian and their ongoing bromance and a heroine that I could believe in. Easily one of my top reads this year. I’m just sad now it’s over.

If I’m honest the only thing I didn’t love (and frankly wondered why he received so much page time) was the photographer dude Joaquin Ramirez, he was all over this story for no apparent reason. And if I’m nitpicking the story does slow down considerably after their return to the States but its only briefly before an absolute edge-of-your-seat, movie worthy, bullets flying, helicopter roof top rescue, missing thumb, couple more rounds of electric shock torture, holy shit he’s been shot ending wherein I may have forgotten to breathe.

Investigative reporter Natalie Benoit is on her way to a journalist’s convention in Juárez Mexico when her bus is ambushed, fellow reporters are shot point blank and she is taken hostage. Believing herself to be caught up in a gang war Natalie is moved to an abandoned church where she finds herself chained to the wall of a cell awaiting her fate. Will they seek a ransom or just rape her? Either way she’s probably dead. Within hours she hears the sounds of a man being tortured, by all accounts an American man.

Undercover Deputy US Marshal Zach McBride is in the adjoining cell; he’s endured a week of torture and interrogation so far and doesn’t know how much more he can take. Of course he hasn’t broken, his military training made sure of that and in truth he doesn’t know anything about the Cartel’s missing cocaine anyways but now they’ve changed the game, they’re offering him the girl for information.

Adding Natalie to the equation just renews Zach’s resolve so that without ever seeing each other they forge a bond and plan an escape. Due to the extent of his injuries Natalie is actually responsible for their hard earned freedom and now the pair finds themselves on the run, escaping across the desert and towards the US border. The Zeta’s cartel has eyes everywhere so they can’t go to the authorities and Natalie is pretty sure her escort the assumed (Mr. Black) is either dealing in arms or drugs so they can’t trust anyone.

Zach and Natalie what an awesome couple, both suffering from survivor’s guilt they were so perfectly matched and so perfect for healing each other. Past heroes and heroines make a welcome return to this story which despite the gripping level of suspense always maintains a realistic edge along with a pulse pounding, melt your heart romance. This is one for the keeper shelf.
382jb5+
book hangover favourite lickworthy cover men in uniform Pamela Clare road trip romantic susp shelf 13 top tortured hero yummy