Yummy -Lords of the underworld 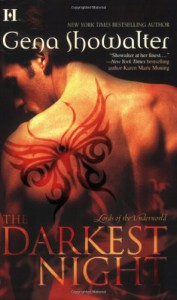 As a fan of paranormal romance and in particular JR Ward's Black Dagger Brotherhood my searches for what to read next kept taking me to this series. That's not to say the two are comparable, but if you like continuing story arcs with multiple character POV's, hot, sexy love scenes, the occasional bloody fight and tortured yet strong alpha males who become kittens once they meet their prospective mates then you might like this too.

The premise for Gena Showalter's world is quite elaborate. Centuries ago a group of immortal warriors released the demons from Pandora's Box. (Yes the Pandora's Box) As punishment the Greek gods cursed the warriors, forcing each to act as host to one of the demons, sort of like a duo personality. Maddox, this books hero is the keeper of violence and because he was unable to control his demon in the beginning and killed Pandora. (Yes the Pandora) Maddox was additionally cursed to die each night at the hands of his fellow warriors, burning in the pits of hell until morning (which can`t be fun) The Lords of the underworld now live in a secluded castle in Budapest, each struggling to coexist with their own personal demon. The other warriors possess things like disease, wrath, death, pain, doubt, promiscuity, lies, and disaster, all of whom getting their own book as the series progresses.

Our heroine here is Ashlyn Darrow. She works for the World institute of Parapsychology and has come to Budapest with her team to investigate the warriors. Poor Ashlyn has a curse of her, born with the ability to hear any conversation that has ever taken place in the location where she is standing. These voices in her head have ruined her life and she'd do anything for a moment's silence. Maddox finds Ashlyn in the woods outside the castle and even though he thinks she's `bait' sent by the `hunters' (bad guys) he is instantly drawn to her. For Ashlyn it's a miracle, because even though she finds this violent and bloody (he's just killed some hunters) man terrifying the voices have stopped. Now she can't bear to be separated from him and Maddox can't help himself either (they never can) carrying her back to the castle and into his chambers. Of course he's going to have to explain himself to the other men, if he can leave Ashlyn's side long enough and what happens at midnight when his friends have to kill him? That's sure to put a damper on the ole love life.

The premise for this series is original and exciting and I will definitely be continuing on, despite the fact at times I was overwhelmed by Greek Mythology and couldn't keep track of who was who and cursed with which demon. I also had trouble with Ashlyn and found her to be written too young and virginal to ever handle a man like Maddox (maybe I was just jealous though?)