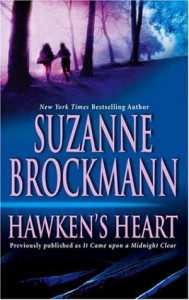 Opening line: "It was only two days after Thanksgiving, but the city streets were already decked with wreaths and bows and Christmas lights."

Well this was another excellent instalment from Brockman’s Tall Dark & Dangerous series. Here with this 6th addition we get Billy “Crash” Hawken’s story and jeez did I ever fall hard for him. A member of “grey group” (who occasionally work alongside SEAL Team 10) Crash is aloof, loyal to a fault and oh so sexy in his secretive, lethal sort of way. He’s a man of few words and even less emotion, or so it seems.

HAWKEN’S HEART is a well written and moving story, told here in two distinct sections each taking place a year apart. Brockmann also manages to encompass one of my favourite themes with this one; that of reunited lovers, made even better here as they’re on the run and that always guarantees a good time. With a fast paced plot, memorable characters, searing love scenes (which for the most part take place in hotel bathrooms and against walls) and an ending that had me saying “perfect, how does she do it?” This one is not to be missed.

Navy SEAL Crash Hawken is the prime suspect in the assassination of his commanding officer. Charged with treason, conspiracy and murder he’s been stripped of his commission and awaits the death penalty. The last person he expects to visit him in prison is Nell Burns; I mean things didn’t exactly end well between them last Christmas and he hasn’t spoken to her since, avoiding any contact by accepting multiple overseas missions. Her faith in him is unwavering though and as she tries to clear his name Nell unwittingly becomes a target, forcing these former lovers on the run. When it becomes evident that Crash is going to give his life (are those explosives in your pocket or …) to keep Nell safe and find the man responsible for killing the Admiral, SEAL Team 10 finally enters the picture to back up our boy.

Waiting almost the entire book to hear from our SEALs had me full of anticipation, (which I’m sure Brockmann did on purpose) because when we’d last left them several team members had been injured and I wasn’t entirely sure of their fate. Thankfully she didn’t disappoint. I also really enjoyed the significant subplot involving Admiral Robinson (THE ADMIRAL'S BRIDE) and his wife Daisy. This is bittersweet as Nell and Crash find each other but ultimately we witness the last days of Jake and Daisy’s love story. Cheers people.

This story is also available along with (HARVARD'S EDUCATION) in the re-issue (TALL, DARK AND DEVESTATING)