Everything you didn‘t know you wanted to know about prostitution 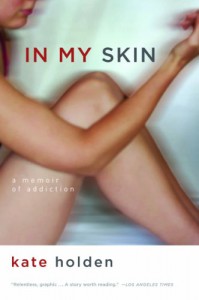 Opening Line: “What do I remember about being a prostitute?”

In My Skin is the harrowing true story of Kate Holden; an average, middle class university girl from the Melbourne (Australia) suburbs who on a whim decides to give heroin a try. We then follow Kate on a five year journey into hell as she slides into the horrors of addiction and then out of desperation prostitution to fund her growing habit.

This is a candid, gripping, graphic and well written story, although not entirely what I was expecting from a “drug memoir” Ultimately it’s more of a peek into the secret world of prostitution and high class brothels then anything else. Yes the heroin is always present but it becomes almost a nagging afterthought as Kate aka “Lucy” spends a majority of the book giving us an unflinching look into everything you didn‘t know you wanted to know about prostitution.

“Lucy” makes no excuses for her choices however and her accounts are often told with an odd sort of pride. As she describes how good she gets at her job, how in demand she becomes. With a stable full of regular Johns, men willing to wait hours for her, buying gifts and professing their love. Of course there are still the rough tricks, the fights with the other girls and the slow nights when she hasn’t made enough money for her next fix or to pay off her dealer or catch up on the rent. And then there’s the abuse to her body -frankly I wondered how she could go on in this lifestyle for years without, well, dieing.

In fact she’s not even getting high anymore, now its just matter of trying to stave off the sickness she’s only ever one step ahead of. Because she can’t work if she’s dope sick and she can’t buy drugs if she can’t work. It’s a vicious never ending, insane cycle.

Throughout everything Kate’s family stand by her, even at her worst she still visits for the occasional Sunday dinner. Emotionally they’re no longer invested, they’ve had to let her go, unable to bare the lies, disappointments or thievery any longer but they’re still always there for her. Still hoping she will come back to them, maybe one more trip to rehab, maybe a methadone program. They never admit to knowing how she’s supporting herself but don‘t interfere either.

Thankfully there is a happy ending to this story but honestly I don’t know how one could ever live a normal life again after this kind of interruption. I do wish this author the best though and hope to read more from her in the future because she has a real gift.