Everything I thought it would be and a descent into madness Opening line: “Tyler gets me a job as a waiter, after Tyler’s pushing a gun in my mouth and saying, the first step to eternal life is you have to die”

There’s not much I can say about FIGHT CLUB that hasn’t been said already (besides I’m not supposed to talk about it -first rule of FC and all) It’s one of those books on everyone’s “to read” list and ultimately it's everything you'd expect it to be; disjointed, astonishing, dark, gritty and fantastic. Although I did wonder how you’d manage to understand what’s going on in the beginning chapters without having seen the movie first because they don’t make a whole lot of sense. 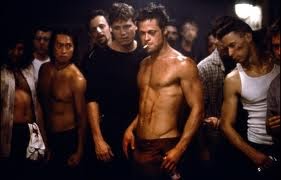 Of course you can’t help but compare the book to the movie. And in saying that I was surprised to learn that Fight Club the movie followed the book faithfully (including dialogue). It is so similar in fact that the book now reads much like a screenplay adaptation, even though it came first. Movies rarely follow the book word for word and subsequently I didn’t enjoy this as much as I’d been expecting to. There wasn’t anything extra here, no added insight into Tyler Durden’s character, no dirty scenes that didn‘t make it into the movie. I just kept picturing Brad Pitt and Edward Norton (not a bad thing) but then I also pictured Meatloaf Big Bob and his huge man boobs. 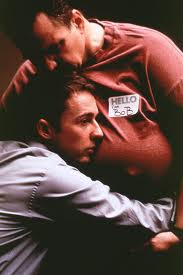 The ending however is completely different and it blew my mind. We see the unnamed narrator’s split personality develop much earlier “I know this because Tyler knows this” It’s not the zenith moment, just a symptom, and he (and we) become aware of it much earlier. We then get to watch “him” try to keep it together, to reign in his space monkeys, to get rid of Tyler by staying awake, to disband project mayhem "Tyler told us you’d say that" and his descent into madness is just brilliant.

The afterwards by the author is also very interesting. Detailing how this all started as a 7 page story he wrote when he was bored at work one day (its included as chapter 6 in the book) and then of course he expanded, added some friends stories (the naughty waiters and film splicing) and wrote what has transformed into the cult classic it is today.

Still, I think everyone should read this book