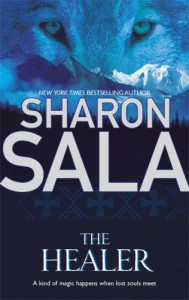 Opening Line: “The rangy she-wolf, still thin from the passing winter, paused at the edge of the tree line above the valley.”

Oh I liked this one. It was just such an all-round great read. With an original and captivating storyline and hero unlike anyone I’ve read before, I can see now why Sharon Sala is so popular. The writing is top notch, the romance wonderfully done (sweet with an undercurrent of sexual tension yet without any annoying melodrama) and the story filled with unique and well-drawn out secondary characters -you’ll feel like you know the residents of the small mountain town. We get two bad guys here, one of which you spend the entire book trying to figure out the identity of. THE HEALER is also especially great if you’re an animal lover because our hero talks to them in a very Doolittley way except sexier.

That’s right, Jonah Grey Wolf, what a fantastic selfless character. Not only can he talk to animals but he has the ability to heal with his touch. He also has great hair, can give our heroine an orgasm just by looking at her and is just an all-round nice guy. I don’t usually go for the beta heroes but I couldn’t help myself here.

Now while this story is filled with the supernatural it manages to stay out of the paranormal romance territory and remains strictly a contemporary. Actually one of the things I appreciated most about Jonah Grey Wolf’s character is that his abilities and formative years are never explained, he’s just able to do what he does, he’s just a healer.

At the age of two a female wolf carries Jonah Grey Wolf into a remote Alaskan village and leaves him there. It is all that is known about the mysterious boy who is quickly adopted by the town doctor. As the years go by it becomes obvious that Jonah is different; with a mystical connection to animals and the power to heal the sick and wounded.

When a visiting hunter gets attacked by a grizzly Jonah of course heals the tourist but he may have shown his secret to the wrong man because now Jonah has tuned into the hunted. Bad guy #1 (Major Bourdain) wants to harness Jonah’s talents in a quest for immortality and will stop at nothing to claim his prize. With his village in danger and a million dollar bounty on his head Jonah leaves Alaska and becomes a drifter, roaming town to town, never staying long or getting too close to anyone.

His travels eventually take him to West Virginia where he comes to the aid of a Lucia Maria Andahar and her giant dog Hobo who is caught in a trap. Jonah heals the dog and accepts Luce’s hospitality of a meal and roof for the night. The pair strikes an immediate connection and despite himself Jonah stays.

Luce has ulterior motives for inviting the stranger to her secluded cabin; ever since she began receiving threatening notes she hasn’t felt safe there. But Jonah can’t stay and he definitely can’t fall in love that would only make Lucia a target for his enemies. Wolves mate for life however and maybe it’s time Jonah started fighting back.
369jb5