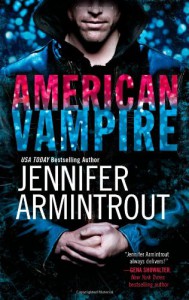 Opening Line: “If there was one power a vampire could really use, Graf McDonald figured it would have to be internal GPS.”

Graf McDonald is just your average American vampire, and that’s part of why I liked this book so much. Well that and the cover, which for some reason kept catching my eye. Anyways, he doesn’t ooze raw sexuality or have any OTT cool vampire skills (other than the obvious), he isn’t self-loathing or sparkly or even particularly sexy. In fact he’s pretty useless, just a vampire with a bad sense of direction and a wickedly sarcastic sense of humour who happens to find himself trapped in the small inert town of Penance Ohio running from a monster named “It” and trying to either bed or drain the girl –he hasn’t decided which yet.

This really was LOL funny in places; Graf’s running internal dialogue and snarky observations of small town life had me marking and reading passages out loud. I also appreciated the uniqueness of this story; in a market saturated with vampire romances it’s rare to find something new. I couldn’t classify this as a paranormal romance -while there is romance it plays more to Urban fantasy with a slight Stephen Kingish feel especially when it comes to the monster. (Which Armintrout leaves purposely vague so we can draw our own conclusions.

Graf is on his way to his Maker Sophia’s legendary July 4th party in DC when he takes a wrong turn and finds himself in small town Ohio. For some reason all roads seem to lead back to the town of Penance –which is getting really frustrating. Plus he’s on a time constraint what with the rising sun and all. Stopping at an abandoned gas station with the hopes of finding a map Graf instead finds Jessa hiding and on the run from “It” Now if scary monsters weren’t enough it turns out that no one has been able to get in or out of this town since “It” showed up five years ago. Why? Good question.

Completely cut off from the outside world the residents have all gone a bit nuts in their isolation. With limited supplies, short tempers and an overabundance of suspicion and fear they have resorting to burning suspected witches at the stake and other forms of corrupt justice. They definitely do not trust strangers much less a vampire. Jessa meanwhile has been branded the town tramp due to her continued relationship with a possessive but now married x boyfriend. She knows what it feels like to be an outsider and the two enter into an odd sort of alliance. Graf of course just wants out. “Oh for Christ’s sake, I had to get trapped in a lifetime original movie didn’t I?”

"He made a list of all the problems facing him, and it looked something like this in his head.
Trapped in Deliverance.
Missing Sophia’s birthday party/possible sex with Sophia.
It.
Need blood.
Obnoxious baggage."