Opening Line: David and I became warriors in the zombie plague on the first day, but I don't think that means we were front line soldiers or something"

Touted as “romantic comedy with…brains.” this was a fantastic, super fun read that had me laughing from page 1 and just didn’t stop. Alongside all the gore and zombie mayhem there’s also a well written, action filled, story here which I think anyone who’s been in a long term relationship or seen Sean of the Dead will be able to relate to. Following average Seattle couple, Sarah and David as they try to save not only their crumbling marriage but struggle through the first few days of a zombie apocalypse. With only each other to rely on it becomes as much of a struggle not to kill the other as it does to battle the rising undead. 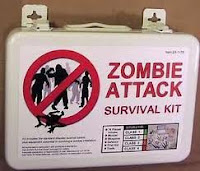 I loved the way this was written, I loved that Sarah and David live in the real world, they talk like we do, they bicker, they swear at each other, they drive a crappy car, they figure out how to kill zombies from plotlines they’ve seen in movies. And the chapter headings are hilarious too, consisting of *helpful relationship advice quotes*, altered to take into account the whole zombie issue. Married With Zombies takes a light hearted look at marriage while kicking major zombie ass and it was a blast. 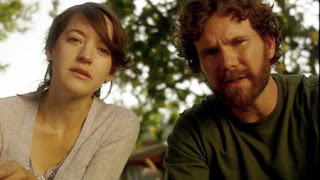 Sarah and David are on the verge of divorce so it’s no wonder they don’t notice a few strange sightings on their way to couples counselling. However when they find Dr Kelly eating the previous clients it gets their attention. Suddenly which radio station to listen to, or how much time David spends playing video games is the least of their concerns. Which piece of office equipment best disables a zombie is the new normal. As it turns out a letter opener, high heeled shoe or even a well aimed Dr Phil book will work in a pinch.

Learning as they go Sarah and David return home only to find their undead neighbour in their bathroom, -turns out you can also kill a zombie by crushing his head with a toilet seat, however this does make things a little awkward when his girlfriend shows up. Luckily she’s got a stockpile of guns and ammunition (never can tell about ones neighbours can you) Because Sarah and David are about to leave the city, I mean things have got to better in the suburbs, right? 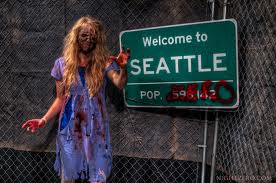 You’ll be cheering this dysfunctional couple along as they stumble across plagues of the undead, religious cults, a visit to a zombie casino, looting (another new normal) first drives in luxury cars, broken limbs and a visit to the country fair (zombies on ferris wheel anyone) Through all the arguing, when it comes right down to it theres no one else Sarah or David would rather go through a zombie apocalypse with than each other. Cheers 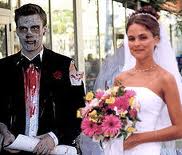 Thankfully this is only the first instalment from the Living With The Dead Series, FLIP THIS ZOMBIE is next.

*Men are from mars zombies are from hell.
*Balance the workload in your relationship. No one person should be responsible for killing all the zombies.
*Make requests, not demands “please” kill that zombie honey, I’m out of bullets.
*Support your partner in their interests. You never know when batting practice, kung fu movies or even poker night might come in handy during a zombie infestation.
*Never go to bed angry, terrified is okay.
*Give each other compliments every day. Even when the undead attack, its nice to feel pretty or badass.
*Address one issue at a time. You can’t load gasoline, pick up food and kill 15 zombies all at once.

"I should have know that having "end of the world" sex wouldn't solve our problems. Though it was pretty great and I highly recommend it. Its one of the big benefits of an apocalypse that no one tells you about. It just makes everything...better, because you know it might be the last time every time."

"Have you ever wanted to smash a car? or break a television? Or maybe burn a big fire in the middle of a city square? If the answer is yes, then you'd have some fun during a zombie infestation. Its the little moments, you know?"