Series worth hunting down 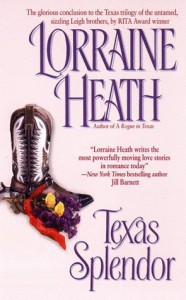 What a great ending to an absolutely fabulous trilogy. I actually hunted down these books used because of the rave reviews and am I ever glad I did. This series will definitely be getting a reread. Lorraine Heath can tell a story, flawlessly capturing the emotions of her characters and never giving them an easy route to love. I always enjoy how our couples fall in love slowly, almost like it’s a surprise to them while they struggle through numerous hardships. And her heroes… jeez. Big, tough, damaged cowboys, willing to do anything for their women and usually causing this reader to tear up once or twice in the process.

Here we get youngest Leigh Brother Austin’s story which is made all the sweeter because we’ve watched him grow up throughout the previous books. When we left him last (5 years ago) he had just gone to prison for a murder he didn’t commit, all in the name of protecting his sweetheart.

Upon his release from prison Austin is devastated to learn that Becky hasn’t waited for him, in fact she’s married his best friend. I really appreciated how lost he was during this time; life had moved on during his incarceration, children had been born and grown, he didn’t know anyone including himself and no longer felt like he had a place in the world. I was also moved by the loss of Austin’s music as he gives up his violin because he can no longer hear the songs in his head. Heartbreaking.

Setting off for the capital to find the real killer and clear his name Austin gets delayed when his horse goes lame. Finding his way to a rundown farm he comes across a shy, innocent (and often barefoot) young woman with a sweet smile who is living in seclusion and has secrets and nightmares of her own. Of course romance blooms and these two damaged souls seek comfort in each other. Never one to shirk his responsibilities Austin marries Loree when he learns she is with child (whoopsie) returning to the Leigh homestead to build a future together and presumably purchase a lot of sugar.

Austin and Loree are a fantastic couple who are virtual strangers when they marry and watching them grow and and ultimately love each other is just beautiful. Much like in book 1 ( Texas Destiny) it’s also a story of two wounded souls finding and healing each other however here we also have big a secret hanging over their ultimate HEA. I didn’t figure out this mystery until I was right on top of it and was surprised and pleased with the outcome.

In the background of Loree and Austin’s romance we also spend considerable time with the other brothers and their wives and while it was fun catching up with Dallas and Huston I did get a bit tired of all the children and babies being born and felt that the book kind of stalled out for a while with all the family stuff going on in the middle over Christmas. The series concludes with a fantastic epilogue taking us 10 years into the future which I loved -it wasn’t the future I’d expected but it was so satisfying.

As others have mentioned Rawley Cooper really shines in this story and I can only hope Heath has given him a story of his own as he definitely deserves a HEA. 5 star series 332jb4