Opening Line: "The letter came at a time in his life when the battle inside his soul could have tipped either way."

ELIZABETH'S WOLF was my first Breed book and even though its the forth in the series, it stands alone just fine and had me captured from the very beginning. 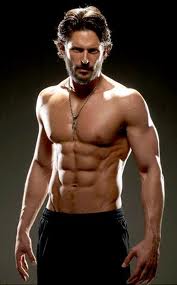 Dash Sinclair is a wolf/human hybrid created in a secret lab from which he managed to escape as a teenager. Growing up alone and on the streets without friends or family Dash eventually finds himself in the military where he is trained to kill. After a horrific helicopter explosion in the Middle East that kills his entire unit Dash is slowly recovering in hospital when his commanding officer begins reading letters to him from a young girl back in the states.

She is Cassie Colder and something about her letters calls to him, something about the girl and her widowed mother makes him feel possessive and protective almost immediately, forcing him to recover faster from his life threatening injuries. When the letters abruptly stop Dash learns that Cassie and her mother Elizabeth have perished in a fire. In his heart he doesn't believe this to be true and hires a private detective to look into their situation. Learning that the two are actually on the run from the twisted, evil man known as Grange, Dash makes it his personal mission to protect them and claim them as his own. His mate and his child.

Months later Dash tracks down Elizabeth and Cassie and rescues them from another would be attacker. Cassie accepts him immediately but Elizabeth although fascinated is weary because she hasn't been able to trust anyone in a long time and those that have helped her in the past have died in the process. Having no choice however, Elizabeth allows herself to be rescued by Dash who whisks them away to a safe house where they can all begin to heal and recover. As Dash learns more about why Grange really wants Cassie his worst fears are realized but as Elizabeth comes to trust and love him he also knows that he will stop at nothing to protect what is now his.

Even though our heroes don't make love until nearly halfway through the book this is one hot read. Dash tells Elizabeth from the beginning that when she's ready he will have her and she accepts this knowing that there is no way to fight the growing attraction she feels towards this gorgeous alpha male. Ultimately the anticipation, the knowing looks, and gentle caresses, the reader foreplay is almost hotter than the actual act.

The sex scenes are graphic and so explicit that at times I was uncomfortable. Still this is a good, strong story full of action, intensity and family bonds. Dash's loneliness is heartbreaking but Elizabeth's character is written strong, she is a worthy mate who completes him. The scenes between Dash and the precocious Cassie are also well written and very sweet. Several breed characters (I'm assuming from past books) turn up for the exciting climax which comes together rather abruptly and finishes too quickly even though all the loose ends are tied up.