Fun, forty and free, and then there's Fred 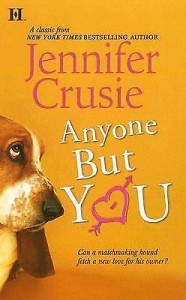 Newly divorced Nina Askew has just turned forty and found her freedom. Of course freedom from her stuffy husband and suburban home comes at a cost and Nina now finds herself a tad on the lonely side. Rambling around her apartment, watching old movies and drinking Amaretto milkshakes with her BFF just aren’t cutting it anymore. She needs something else. What she needs is a puppy; a perky, rambunctious, adorable puppy. What Nina gets is Fred. (Personally I’ve always believed that your dog finds you) And in return Fred finds Alex for her, the decade younger, hunky E.R doctor from downstairs.

Fred. This really is his book, he absolutely steals the show here and I found that instead of falling for the hero (which is usually the case) I fell for Fred. Those opening chapters where Nina adopts his depressed, smelly, vertically challenged, morose self from the pound while trying to get herself a cheerful puppy are just brilliant.

“Nina turned to the attendant, and said, “I’ll take him.”
The attendant raised an eyebrow, “That’s your idea of perky?”
Nina gestured to the puppies, “They’ll all be adopted right?”
“Probably”
Nina took one last glance at the tumbling, chubby puppies. Prozac with four legs and a tail. Then she looked at the other dog, depressed alone. Too old to be cute anymore if he ever had been. “I have a lot in common with this dog” she told the attendant.

Anyone But You was my first Jennifer Crusie read and it was a pleasure. With a sweet, uncomplicated (older woman/younger man) romance and relaxed writing style; I can see why Crusie is so popular. This just put a smile on my face which honestly I needed because it’s been a rough month.

My only issues would be that their friendship seemed to develop really fast. They met and bam, they were instantly familiar, spending all their time together, watching movies, jogging and hanging out, there was no getting to know period. I also felt that the ending was a bit rushed (word count?) but these are just minor gripes

The secondary characters are engaging and addictive and I can’t help but hope they got their own stories (have to check into that -written in 96.)I was also pleasantly surprised by the steaminess of the love scenes. Yeah, nice! And how great is it to read about a 40 year old woman grabbing the younger hot guy. Sure she had some body issues (saggy, things not where they used to be) but this just made it all the more realistic. Cheers
357jb3.5