This book gave me "heavy boots" 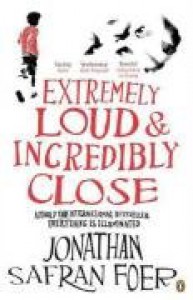 Opening Line: “What about a teakettle? What if the spout opened and closed when the steam came out, so it would become a mouth and it could whistle pretty melodies, or do Shakespeare, or just crack up with me?

Reviewers seemed to either think this book was "absolute genius" or not be able to finish it. I fall somewhere in the middle because while as a whole it was haunting and unforgettable some sections were also a struggle to get through.
Told from the mind of nine year old Oskar Schell, we enter his world about a year after the "The worst day" and subsequent death of his father during the 9/11 attacks at the World Trade Centre. It soon becomes apparent that Oskar is not your average nine year old. He is an inventor, a collector, musical prodigy, lover of Shakespeare, Stephen Hawking's pen pal and a detective. And his IQ and differences (possibly some form of autism or Asperger's syndrome) set him apart from his peers.
His father nurtured his above average intelligence, creating intricate mysteries for Oskar to solve and he felt closer to him than anyone, which is why he is having such a hard time coming to terms with his death. Oscar can't sleep and is continually inventing ways to stop buildings from falling to the ground. He has also developed rules that make it easier for him to function in the world and not "wear heavy boots" i.e.-feel anxious. He only wears white clothes, won't go above the 6th floor in buildings, won't ride elevators or ferries and gives himself bruises when he feels particularly anxious or lies about something.
One day while smelling the clothes in his father's closet Oskar stumbles upon a blue vase and in turn a key and a letter that simply says "Black". Taking it upon himself to solve this one last mystery Oskar sets off to find information about the key. After going through the phone book Oskar discovers that there are 472 people with the name Black living in New York, surely one of them will know something about the key. So Oskar sets off to meet them all. It will of course take a long time, and make him anxious but it will also help him feel closer to his father again. Along the way he meets Mr. Black who ironically lives in the same building and together they scour the five boroughs of NYC having many adventures.
His mother is mostly absent throughout, just a shadow in the background of his life. She has a new `friend' and Oscar feels she doesn't miss his father anymore. How can she laugh? It was shocking to me that she just lets him roam about New York. He simply tells her he's going out and she says okay. Really!? He's nine.
While for the most part I enjoyed this, it never really moved me, and at times was a struggle to get through. There were sections, particularly the ones involving his grandparent's story that I found almost unreadable. They were just too vague, disjointed and abstract to be able to put in any sort of order and make sense of, and to be honest I abandoned them about halfway in. Oscar's POV was easier to follow, once I got on board with his little idiosyncrasies; like his heavy boots, inclusion of handwriting samples, random photographs, paper airplane diagrams and the repetition of the form letters from Stephen Hawking.
So I'm not sorry I persevered through, in the end it did leave a big impression (I can't stop thinking about the messages on the hidden answering machine) I'm super curious to see the movie now.
376jb35
abandoned the sub-plot books into film child hero fiction heartbreaking hero Jonathan Safran Foer not so HEA shelf 13