Remember when vampire romances were a thing? 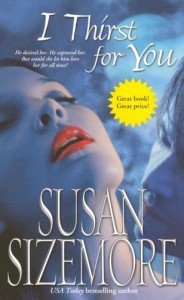 Opening Line: “Two things pain can do for you: sharpen you up or dull you down. It never does anything for your mood.”

I’m pretty certain this was a case of the right book at the right time. And I say that because I’ve read some highly rated books lately that for whatever reason I’ve struggled to get through and yet couldn’t put this one down. It might just be that I haven’t read a paranormal (vampire) romance for ages and I welcomed the change from NA, YA, erotic shades of grey and romantic suspense, or it was a cleansing of the palate back from the days when I read nothing but vampire romances.( I think I must have missed them.) Then again maybe this was just an awesome book.

Anyhow, I Thirst For You is the second in the Prime series and I loved it. Easily read as a standalone (some world background/clan history is provided) this is a great story that will hit all your secret vampire fantasy buttons (you’d forgotten about) and will also work for those of you (me) into the whole kidnapping/taken hostage/prisoner on the run thing -I personally love that theme. The story is very sexy, humorous, with good action scenes and an exciting yet somewhat predictable ending. All in all it’s a great ride, in fact for the first hundred pages or so I couldn’t put it down.
Pilot Josephine Elliot is recovering from a plane crash which left her feeling responsible for the death of several of her passengers. Filled with guilt she has escaped to the quiet of the desert for a week of camping and solitude. Jo is also suffering because she is able to read emotions and right now needs to block the noise in her head. 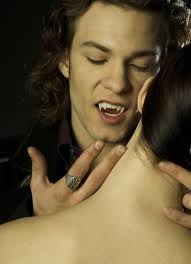 Vampire and ‘prime’ Marcus Cage has just escaped from a top secret lab and is running across the desert. He is very hungry having been starved, abused and used as a test subject for months. As Marcus moves through the desert night he senses Jo, not just her heartbeat and the blood coursing through her veins but something else too. She has that “it” qualifying her as his soul mate should he choose to act upon it and providing he doesn’t drain her dry first because he is so thirsty.
For about half of this book Marcus holds Jo prisoner while he tries to outrun the bad guys and a raging forest fire set to flush him out. They stay in cheap motels and Jo initially spends a great deal of energy trying to escape (when she’s not hypnotized into sleep that is.) They soon begin sharing dreams/nightmares and Jo learns Marcus’ story, so that as much as she wants to escape him she also wants to help him and then she just plain wants him.
Marcus is pretty great (as far as vampire kidnappers go) forceful yet also considerate and restrained (it is after all his birthright as ‘prime’ to have sex whenever and with whomever he chooses)
There is an awesome foiled escape attempt (resulting in a Jeeps suspension getting a work out) and then Marcus lets her go having developed feelings and not wanting to risk Jo's safety any longer. The conclusion sees us back at the secret testing facility and began to remind me very much of Lora Leigh’s Breed series, with crazy scientists, genetic experimentation and hidden cameras while the bad dudes take their clothes, lock them up together and watch.  Yeah.
385jb4.5
kidnappinghostage situation paranormal rom right book right time shelf 13 shifters Susan Sizemore vampire romance vampires