Opening Line: “It was Friday the thirteenth of October. We joked about that -flying over the Andes on such an unlucky day, but young men make these kinds of jokes so easily.”

This was a fantastic read, absolutely gripping even though I already knew the story pretty well having read Piers Paul Read’s Alive: The Story of the Andes Survivors and catching the movie on TV a couple times. You wouldn’t really think there'd be much left to tell of the ill-fated Uruguayan rugby team’s plane crash and their subsequent 72 days spent stranded in the Andes Mountains, but we’ve never heard Nando’s story before and it’s worth hearing. (He’s the one played by Ethan Hawke in the movie who was ultimately responsible for their rescue)

This book is also interesting as its written 30 years after the event so we get detailed updates from, not just Nando but the other survivors as well. Describing their lives since the rescue; jobs, marriages, children, problems with drugs etc. (There are lots of children and that made me smile)
There are some 30 pages of photographs included here which contain shots of the team before the crash, during their ordeal, during their rescue and in the years after. The pictures taken at the crash site are especially haunting because they just look like college boys on vacation until you notice the eyes, gaunt faces and the fact that they’re starving. Oh and the wreck of the plane in the background. Yes, Nando does go into detail about the much published cannibalism and their brutal decision to eat the dead in order to survive. (Most looked at it as a sort of religious experience, i.e. eating the body of Christ to sustain themselves as starvation would be suicide which goes against Catholicism.) 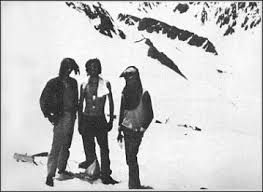 As an essentially non-religious person I have to say that I found Nando’s interpretations of God particularly interesting. How could you not come to an understanding of God and life and love when death has tapped you on the shoulder for such a long time? You would have to make peace with it all. On that note Nando says he didn’t suffer from PTSD or survivor’s guilt because he had felt death and was no longer afraid, choosing instead to live, to honor the victims. “God is love, God is all around us.”
I have to say this book affected me on many levels and Parrado tells his story with such candor and feeling that I (scarily) joined him right there at the crash site more than once. One other scene continues to haunt me; after everything he’s been through when Nando gets back to his father’s house, he stops and just looks out the window, realizing that life is still going on, people are still going to work, kids are still playing in yards and he thinks “I wouldn’t have left much of a hole in the world had I not returned.”
In a first person account, Nando Parrado describes how after being unconscious for 3 days he awakens to discover that the plane carrying his team to a rugby game in Chili has crashed somewhere deep in the Andes. He soon discovers that many are dead or dying including his mother and sister. Those still alive are stranded on a glacier at nearly 12,000 feet with no supplies or means of contact. Struggling to survive takes on a whole new meaning as they face freezing temperatures, deadly avalanches, starvation and finally news that the search has been called off. After some 72 days Nando makes the terrifying decision to hike out of the frozen wilderness, leading the expedition in an attempt to find help.