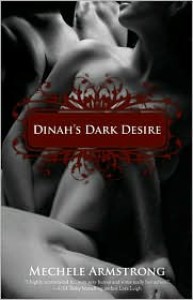 Originally published as an eBook, DINAH'S DARK DESIRE is only 131 pages long which you should bare in mind (unlike me) when purchasing the costly PB. A bonus short story (very short) has also been included. I read this book in a couple of hours and although it had some potential and a couple of well done and graphic 3-way love scenes the actual story line and character development never really saw completion.

Dinah has been best friends with Taylor since they met in college and there is nothing that they can't talk about. When he comes out she doesn't judge him like a lot of others instead she embraces another best friend, his gorgeous boyfriend Ian. Now she has two hunky best friends (the author continually tells us how muscular and hunky these men are although I have no idea what they look like as she never really described them) Anyways, Dinah's always been a bit of a doormat, allowing her father and then her live in boyfriend Brad to berate her and finally in Brads case, beat her unconscious. When Dinah awakes in the hospital it's Taylor and Ian who come to the rescue, taking her home with them and caring for her while she recovers.

At first Dinah doesn't take their flirtations and sexual innuendos too seriously but she soon learns that the pair wants her for a third in their relationship and they want her for keeps. The boys know she's in a fragile state but they're willing to take things slowly, to gain her love and trust no matter how long it takes. Dinah isn't sure if she'll ever be ready for `that' kind of a relationship, but she does know that Taylor and Ian make her feel complete and when she's between her guys she's the most aroused she's ever been. It's just going to take some time for her to trust again and figure out exactly how things would work. And it's sure going to be fun finding out.
There is a mild sub-plot involving Dinah being harassed at work and at the video store but this never really gathers speed and is resolved quickly. In the end (literally) Dinah confronts her aggressor's and gains back her self confidence allowing her to give in to her darkest desire.
This was an okay read; I mean its erotica not Hemingway. So if you want a quick, easy story with graphic, sensual love scenes involving M/M and M/M/F action this could be the book for you. And if this had been cheaper or longer I definitely would have given it a higher rating. Cheers!
contemp rom extra sexy time MMF Mechele Armstrong menage novella shelf 9