This week has been one filled with romantic tragedies for me. First I went to the see the re-release of Titanic in 3D (Jack!) and then because I hadn’t had quite enough heartache I decided to revisit one of my all time favourite romances with Somewhere In Time (Bid Time Return.) It’s been years since I first read this as a teenager, -god knows how many times I watched the movie starring Jane Seymour and Christopher Reeve (another tragedy there) and I wasn’t sure if I’d feel the same about it now.

Really the only difference this time around was that I was able to appreciate the quality of the writing and amount of research that must have gone into making this tale of time travel, well, believable. The romance is still as moving as it was. And yes much like Titanic even though I knew what was coming I still shed a tear at the end.

Told from a first person narrative and written as if you were reading a journal, we meet Richard Collier. A 30ish Los Angeles screenwriter with an inoperable brain tumour. Not wanting to burden his family, Richard packs up his life and decides to end his days wherever the road takes him. These beginning chapters are fast moving, choppy and written with short slightly erratic paragraphs as Richard dictates into an audio diary. In the second half the journal entries become longer and more detailed and quite honestly a little dry in places.

Through the fate of a coin toss Richard finds himself at the Hotel Del Coronado, a grand seaside resort, steeped in history that manages to become a character onto itself here. It’s within the hotel museum that Richard comes across a turn of the century photograph of an actress named Elise McKenna, and at that moment everything else in Richard’s life ceases to exist. He can’t stop thinking about the beautiful woman, or the look in her eyes, becoming obsessed with her and the time she lived in. Richard then begins to research her life and in every instance notes a complete change in her character after her acting troupe left the hotel 75 years before. If only he could meet her, if only he could get to her and find out what made her so sad, why she never married. 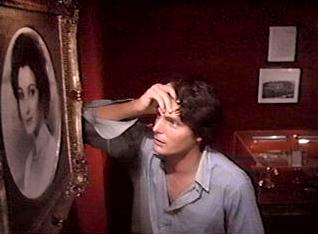 Its then that Richard begins researching time travel and self hypnosis, convinced that he can get back to her. When he finds his name in an 1896 hotel registry he knows with certainty what the change in Elise was. He was with her, now he just has to get back to her. Some of the time travel paradoxes in this are positively mind bending and you can’t think about them too long for fear of brain explosions.

As I mentioned the writing changes as soon as Richard finds himself in 1896 (yeah he does) becoming more formal and detailed. It is explained that he is now writing his accounts instead of dictating. Matheson’s descriptions of the time are pure genius, not just taking into account the obvious like clothing but the social attitudes, the language differences, the size of people.  Is everyone short and stocky? I loved the descriptions and Richards discovery of it all. The romance aspect here is beautifully done albeit a little soppy and with a hint of the supernatural, because as it turns out Elise was expecting him. Well not him but through a physic she’s been waiting for someone mysterious to sweep her off her feet. Her over protective manager plays the antagonist here, trying in vain to keep them apart and while Richard should hate him he finds that he cannot because he knows how the man dies. I suppose you can’t change the past though and as much as I found myself cheering for our couple it was already written. Probably the most moving part of this book is in the afterward (provided by Richard’s brother) which explains that his time travel was only that of a form of escapism provided by his tumour amassed brain. Robert Collier cannot however explain the love letters in Richards pocket or the antique (yet new) pocket watch or Elise McKenna’s famous dying last words. He leaves it up to the reader to decide if it happened or not. I think it did. Cheers. 291jb4