So this is what all the fuss has been about Opening Line: "When I wake up, the other side of the bed is cold."

THE HUNGER GAMES is a fantastic, breathless and somewhat brutal read that once you start you simply can’t put down. Initially I had no idea what this book was about or what to expect in terms of YA writing, it had just been recommended to me by so many people and had such a buzz surrounding it that I had to find out for myself why. Well let me say I was not disappointed and have now joined the legions of Suzanne Collins fans in awaiting her next instalment.

Written along the lines of Stephen King’s THE LONG WALK or Orwell’s 1984 (I may be aging myself here) this story still feels very original and sucked me in completely with its modern day Survivor-esque retelling. The Hunger Games is the ultimate in reality TV, suspense, scripted realism, romance and survival that you should not miss.

Set in a post apocalyptic future (although we frustratingly never learn the why's, how’s or even when of this future.) This new communist-type America known as Panem has been divided into a Capital and its 12 districts. We follow 16 year old Katniss as she struggles to keep her starving family alive, hunting and gathering with her best friend Gale. Unbeknownst to her these are valuable skills as the annual hunger games are about to begin.

Each year these games require two children from each district who are chosen based on a lottery system for compulsory participation. These televised games are then broadcast throughout Panem (with mandatory viewing) as the 24 contestants fight each other to the death, leaving just one victor at its violent conclusion. It’s kind of like Survivor but instead of being voted off the island you have to kill your competitors. When Katniss’s younger sister is chosen as the female contestant from their district Katniss volunteers to take her place. Then together with Peeta the other lottery winner they travel to the capital and begin preparations for the opening ceremonies and ultimately their death in The Hunger Games.

Oddly this has been written without paragraph breaks and I have to admit the first part of it dragged for me, as Katniss is groomed, clothed, and schooled by her entourage within the capital. However as soon as the games begin, lookout! By this point in the story you have become attached to several key characters and its then that you realize things can’t end well as there will be only one winner. Over a period of about 2 weeks and against overwhelming odds we watch 24 victims dwindle as they struggle to survive. Simultaneously avoiding and hunting each other they form alliances, face hunger and mind numbing thirst, mutant animal attacks, friendship, love and ultimately a distrust of everyone as Big Brother raises the stakes to keep the audience interested.

This is an exciting book that will keep you up late into the night and resonate with you long after you’ve finished. Cheers. 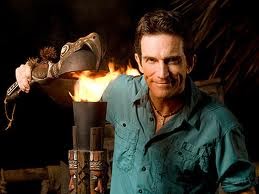