Fun marriage of convienience -where do the "Johnnies" exist in the real world? Opening Line:"Chelsea was being followed."

This was a sweet little read despite the somewhat fluffy, marriage of convenience storyline. Sometimes Brockmann just hit’s the spot though; so comfortable and easy, the perfect interim books when nothing else suits the mood. I’d forgotten how perfect some of her older romances can be. SB’s writing is just so damn good, the way she makes each character familiar yet unique, all their little quirks, the light humour and sexual chemistry -the fact that the hero usually cries *sigh*.  Sadly some of the older stand alones are starting to feel a little dated now but I still highly recommend them.

Chelsea Spencer has just been mugged. As she scrambles down the Boston street after her purse we meet Giovanni “Johnny” Anziano; Hero, rescuer, bad guy bringer downer, chef extraordinaire, meals on wheels driver (did I mention gorgeous?) and all-round perfect man. Where do these guys exist in the real world? Oh right they only live in romance novels.

Anyways Johnny saves the day then offers Chelsea a ride back to where she left her shoes or a medical clinic, whatever it doesn’t matter, the attraction between them is immediate. Yet despite his chocolate eyes, easy smile, (great ass) and persistence Chelsea can’t agree to go on a date with him, she’s getting married in less then a week. It appears this romance is already doomed.

A few days later Johnny receives a phone call, Chelsea has business proposition for him, will she meet him for coffee. A big hell yeah. Johnny can’t stop thinking about her, what might have been and all that. Her proposal leaves his head spinning however. She wants to marry him. It seems that Chelsea’s “fiancée” has pulled out of their wedding at the last minute and in order to get her grandfathers trust fund (and keep her business afloat) she needs to be married. Chelsea will pay Johnny 250,000 if he marries her for a matter of weeks including a nice trip to the Caribbean for their pretend honeymoon after which it can all be annulled and everybody walks away happy. Sounds easy right? Welcome to romancelandia. 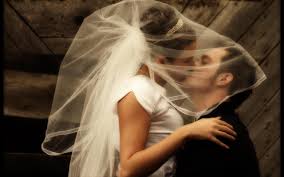 The problems start right after their first kiss -which takes place at the alter and  is totally hot. Talk about embarrassing now they can’t keep their hands (or mouths) off each other. How are they going to get an annulment if they consummate the business deal?  Problem solved, they’ll just avoid each other; separate rooms for the honeymoon, out of sight out of mind. And that’s when the phone sex comes into play. Phew! *wipes sweat off brow*

This is a great story, as overused as the plot device is Brockmann still manages to make it believable and interesting. Johnny is just the perfect, nice guy hero, the sexual tension is off the charts and both characters are well developed and interesting. I particularly liked how Johnny wasn’t quite who he seemed to be, with his past slowly being revealed. I also got a kick out of how Chelsea was the one who most wanted to break her own rules and get-it-on!

So no, this isn’t groundbreaking buts it’s everything I look for in a light romance and I’ll probably read it again one day. Cheers
296jb4