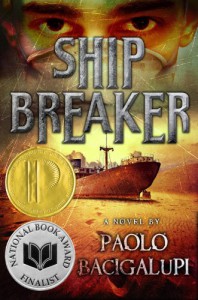 Opening Line: “Nailer clambered through a service duct, tugging at copper wire and yanking it free.”

Wow what a world Paolo Bacigalupi has created here with Ship Breaker. I won’t say this is the best dystopian book I’ve read but it’s definitely up there as the freakiest in terms of a plausible or even inevitable future -should global warming cripple the earth, the ice caps melt and all of our natural resources disappear.
Initially I’d been drawn to this book because it reminded me of a documentary I’d seen about families in India who lived and worked on the beach, eking out a living by breaking down oil tankers for parts (which is the exact scenario here) The extreme poverty, danger, expendability and daily fight for survival stuck with me and I suppose that’s why for several chapters here I assumed this took place in a third world country, it does but that country is now on the US Gulf coast. For me this is where Ship Breaker shines; the world building here is simply awesome. Anyways this was a great read, well written, unique and action filled. There are morality choices (love books that make me think, what would I do?) some romance (a hint of) pirates, hurricanes, knife fights, train chases, treasure hunting and a drug addicted antagonist who also just happens to be the hero’s father. Yeah he was a very bad man.  Come to think of it there is quite a bit of violence in this story.
I also enjoyed the distinctions presented here in class discrepancy and fell in love with a character named Tool (a DNA altered or manufactured half man/dog/tiger who could really do with his own book. I struggled a bit with the weird names (reminding me of THE HUNGER GAMES in their anonymity) Pima, Bapi, Sloth, Tick-Tock. And lastly I just need to mention a scene that will haunt me for a long time –when our hero gets lost and stuck deep within the bowls of the tanker, its pitch dark and he’s fallen into an oil reservoir.This made me frantic, claustrophobic, terrified and a real fan of Bacigalupi.
Nailer works the “light crew” scavenging through the wrecks of ancient oil tankers that now litter the coast. His job is to crawl deep inside these iron beasts and strip them of their copper wire, turning it over to his violent crew boss. It’s very important the Nailer make quota as there are many other kids starving in the shanty town who would kill for his job. It’s a brutal existence but all he knows. The other problem that is fast approaching is that Nailer is quite simply getting too big for his work, struggling to fit into the rusty pipelines. And then what? With no way of earing his keep and only so many viable organs to sell how will he live?

As luck would have it a “city killer” hurricane strikes the coast and in its aftermath Nailer and his friend Pima stumble upon the wreck of a luxurious clipper ship. Smashed against the rocks the ship is filled with more valuables then either of them could dream about in a lifetime. Nailer has hit the “lucky strike” now if he can find a way to claim and cash in the bounty before the other scavengers discover them. He hadn’t counted on any survivors amidst the wreckage however and now he’s faced with the choice of killing this half drowned “swank” girl or saving her in the hopes that her wealthy family will reward him. Cheers
330jb4
dystopian end of days fiction Paolo Bacigalupi pirates and privateers sci fi shelf 12 YA