Taking the series nowhere but it is still new JR Ward 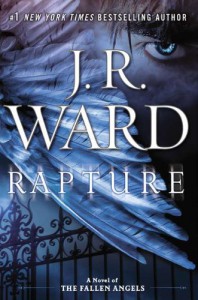 Opening Line: "Grave. And not as in serious. As in headstone and freshly disturbed earth, as in body down under, as in ashes to ashes, dust to dust.”

I’m one of those obsessive JR Ward fans that knows the release date of her latest book about a year in advance and plans accordingly, rearranging my work schedule and blocking off several uninterrupted days to read it. If I’m honest though her Fallen Angels have never quite made it to the same level as her BDB boys however I did feel (at least with the last book (Envy) Ward had turned a corner with the series, as it was a fantastic read and really got me excited about what was to come. Unfortunately with this installment it just feels like we`ve gone back to square one because in the end I came away feeling underwhelmed and disappointed.
Don't get me wrong, it’s still ‘new’ Ward so it’s still all kinds of awesome but Rapture took me over a week to finish with sections where my mind wandered or I just felt like I’d read it all before. There wasn’t really anything new here with characters, traits and events that felt rehashed and a little too familiar along with a slow moving storyline and not a whole lot going on in the romance department. I also don`t feel like this book moved things forward; in fact I would go as far as to say that Rapture stalled, essentially taking the series nowhere.
Okay now that that’s out of the way. Rapture is book 4 in the Fallen Angels series following our angel Jim Heron as he battles the devil in the ultimate endgame of good vs evil. Jim has been chosen (by like GOD himself) to rescue the souls of seven people from one of seven deadly sins. If he fails so does all of humanity, so the stakes are pretty high. Currently he stands at a win of 2 to 1 with events in the last book hitting him hard as Devina (the devil) took out one of his team *sigh* Well and then there`s that little issue of him having sex with her, and oh that whole Sissy trapped in hell situation. Anyways.
As usual going in Jim (and the reader) don’t know whose soul is going to need saving. I have to say I was a little surprised to learn that previous bad boy Matthias was being resurrected here as the latest hero. Can’t say I liked him much before, but I wasn`t supposed to. Of course through clever writing Ward manages to transform him into, if not swoon-worthy at least redeemable enough that I felt for his plight.
We join Matthias as he wakes up naked on top of a grave (Jim’s) He has no memories of how he got there, in fact he has no memories at all which might actually be a good thing considering the type of life he lead before his little trip to hell. As the leader of XOps (a covert group of assassins) he was a bit of a monster and his body still has the scars to prove it.
So Matthias stumbles around the graveyard, getting used to his dysfunctional legs before wandering onto the road and getting hit by a car. Say hello to Mels Carmichael; reporter for the Caldwell Courier Journal, user of Beth’s coffee mug and romantic lead. Mels is your standard Ward heroine; little bit Jane, a dash of Griers, entirely forgettable but perfect for Matthias. And while their romance was fine it was nothing special, they did however seem to spend an exorbitant amount of time in hotels and restaurants or eating in general.
All the Wardisms are here, yup Ward's unique brand of slang and riddelesque product placement is in full bloom, which sometimes makes me laugh but also gets to be a bit much particularly in this series. “He’d come to the land of Lysol, piss-green tiles, and scales that were used to weigh brains and livers” -Um, couldn`t you just say morgue?
I’m surprisingly becoming a big fan of Devina, what with her ongoing therapy sessions, OCD, hoarding issues and school girl crush on Jim her POV`s are always a blast to read.I also just have to mention Adrian; the sacrifice he makes here is so well... moving, it had me way more invested then the whole crossroads climax that we had supposedly been waiting all book for. That was kind of meh, what did he do that for? Whereas Adrian, he broke me. Cheers peeps. ~3.5~ 329jb3.5
angels biker boyz gone to the dogs good bad guy JR Ward scars r sexy shelf 12 tattooed hero tortured hero urb fantasy