Dissapointing -after the first two books in the series 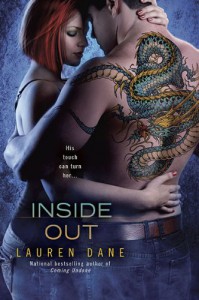 Opening Line: "She arched on a gasp as the heat of his mouth met her neck."

Instead we’re just given endless and often repetitive conversations amongst a group of friends. Centering on Erin’s risky final stages of pregnancy, Ben’s angry, bigoted father and some rather high-schoolish discussions on how much Ella/Andrew are totally crushing on each other; which is then dissected by each member of the group and reasons given to why they shouldn’t or shouldn’t be dating. This was monotonous. I kept waiting for the real story to begin or some kind of conflict between the H/h to develop as they began to fall in love. Regrettably none of these things ever materialized and honestly  I was bored.

Another huge problem for me and I’m sure at least part of the reason why I never connected with this book was the similarity of everyone’s names. With an Ella, Erin, Elise and Adrian I was often at a loss as to who was doing the talking. The hero was also referred to as either Andrew, Drew, Andy or Cope which had me double checking that I’d somehow missed the introduction of a new character and to top off the name game there were also 2 different antagonists a Bill and a Billy. Gah!

Ella and Andrew have been tip toeing around a mutual infatuation for years but it’s taken that long for Ella to be emotionally ready to return gorgeous ladies man and perpetual flirt Andrew’s steamy glances. She’s still wary but at last feeling ready to reclaim the vibrant and outgoing person she was before her ex boyfriend destroyed her confidence then attacked and almost killed her. *I’m sorry but this is the same back story given for the last two heroines in this series*

Okay so basically Andrew and Ella start dating and through some romantic poems, a mixed tape and several visits to see Erin in the hospital they fall in love. There isn’t much drama where these two are concerned and as I said no real conflict. I did enjoy seeing another side of Andrew’s (up until now) playboy character and witnessing how shy and out of his element he became with Ella. And the love letters he sends her will have you sighing. Watching Ella find herself again was also interesting but as I said had been done before. Of course all the other characters are back and feeling more like a family then ever Although we don't get another Chapter 16 like in (Coming Undone) or into Todd or Ben’s heads.

I do recommend this to fans of the series, especially after going over some of the other reviews as I seem to be in the minority when it comes to my low rating. I wish I’d liked it more. Cheers